A novel method for sentinel surveillance may provide early warning of increasing transmission of SARS-CoV-2 in a community.
Reese Richardson
PhD Candidate, Northwestern University
Follow
Like Liked by Evelina Satkevic and 2 others
0

In this study, the authors develop a method for estimation of SARS-CoV-2 community transmission rates based on a sentinel population of people seeking outpatient testing with recent symptom onset. This method has fewer operational delays than methods based on hospital data, and may be subject to few…

When it comes to fighting the COVID-19 pandemic, timeliness is everything. When SARS-CoV-2 begins spreading at a faster rate in a community, public health officials need to recognize this trend and respond quickly; delaying action by even a week can significantly increase COVID-19 cases, mortality, and burden on healthcare systems1,2.

Despite the need for timely and accurate estimation of rates of disease spread, the most-used indicators of SARS-CoV-2 transmission are associated with various biases and delays. For instance, the daily number of new cases and the test positivity rate are heavily swayed by fluctuating access to testing services. The number of COVID-19 hospital admissions or emergency department visits can give a more consistent idea of disease burden, but hospital admission can occur up to two weeks after a patient is initially infected. This means that if transmission begins to increase in a community, public health officials using hospital admissions data as an indicator won’t spot an upward trend for many days— giving the virus time to infect more people.

In this work, we investigated the feasibility of using the sentinel population of recently symptomatic individuals presenting for diagnostic testing. Symptom onset occurs sooner after infection than do other outcomes like hospitalization. We hypothesized that if we collected information about the date that these individuals became symptomatic (i.e., their date of symptom onset), we would have a data stream that could be used to reliably assess SARS-CoV-2 transmission with minimal lag.

Building this data stream would require outpatient diagnostic testing vendors to collect two data points for each person getting tested: symptom status and date of symptom onset. Unfortunately, outpatient diagnostic testing sites in the United States were not typically collecting this information. Early in the pandemic, however, the Chicago Department of Public Health (CDPH) and Illinois Department of Public Health (IDPH) established community-based testing sites around the city of Chicago that routinely collected these two additional data points. With this data, we had the information we needed to operationalize the sentinel surveillance system.

Composed of staff and researchers from IDPH, CDPH, Northwestern University, and the University of Chicago, our team used this sentinel surveillance system to monitor changes in SARS-CoV-2 transmission in Chicago from September 2020 to June 2021. The community-based testing sites generating this data were not designed for sentinel surveillance—the point of the community-based testing program was to increase access to diagnostic testing in underserved communities. As a result, these testing sites changed hours and moved locations quite frequently. Despite this, we found excellent retrospective agreement between the signals generated from sentinel surveillance and signals from hospital-based indicators. Furthermore, in deployment there was one key difference between the two signals: trends could be assessed around nine days sooner with sentinel surveillance than with hospital admissions.

These results suggest that a deliberately designed sentinel surveillance system based on outpatient testing could provide early and accurate detection of increases in transmission. Implementing this sentinel surveillance system only requires that diagnostic testing vendors consistently collect two additional data points. In return, public health officials could gain an additional week or more of notice when transmission changes, which could prove lifesaving. 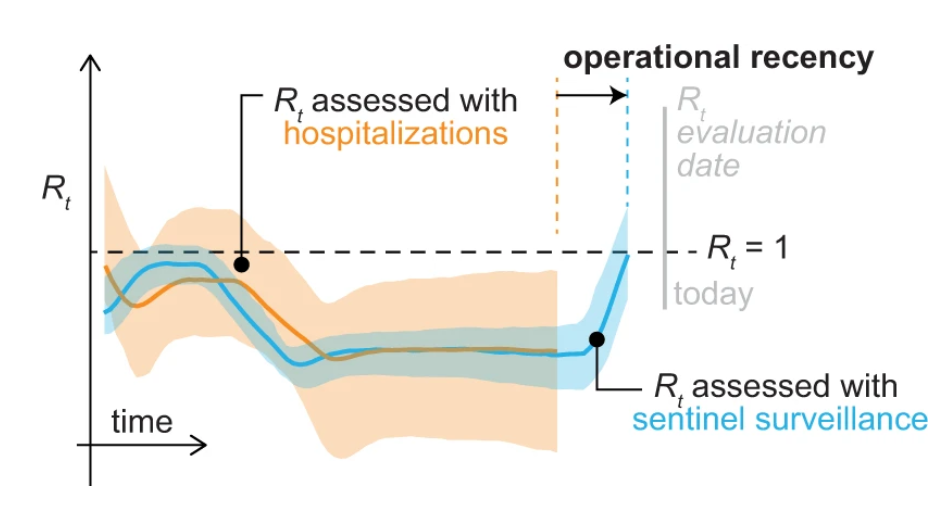 A novel method for sentinel surveillance may provide early warning of increasing transmission of SARS-CoV-2 in a community.