Tumor colonization is counteracted by ROS-activated and IL-1β-secreting tissue neutrophils.

The discovery of the Ncf1 polymorphism

The goal of our chronic inflammation research has been to identify the root cause of the problem since 1990s. Determining the sequence of the human genome gave hope to solve genetic causes of chronic inflammation. This led to large success to identify monogenic diseases. However, common diseases are caused by multiple genes and influenced by environmental factors, known as complex diseases. Although hundreds of different quantitative trait loci (QTL) for each complex disease entity have been shown in genome wide association studies (GWAS), it remains difficult to identify the underlying single nucleotide polymorphisms (SNPs). An obvious example is the finding of the major histocompatibility complex type II region (MHC-II) associated with rheumatoid arthritis (RA) for more than 50 years. The disease susceptibility genes have not been identified in the MHC-II locus. A major drawback is that transgenic animal models have artifacts, leading to unreliable conclusions.

Rikard Holmdahl (RH) has designed an alternative way, to perform genome analysis of complex disease in animal models for human diseases. RH realized that the animal models needed to be both highly reproducible and also mimicking the human diseases, and therefore has spent considerable time in developing new models useful for genetic analysis. Using early type of genetic markers, microsatellites, and without knowledge of the genome sequences, RH was the first to map most of the QTLs in rodent models for multiple sclerosis (MS) and RA in 1996-98. RH immediately advanced to positionally clone the underlying SNPs. This was, and is still, a laborious and time-consuming process, based on isolation and testing of recombinants in congenic strains. The first gene was cloned in 2001, and was delayed to be published1, identifying a SNP in the Ncf1 gene. This identified mutation, impairing the production of reactive oxygen species (ROS), was disease causative. Thus, in contrast to the prevailing dogma of promoting inflammation, ROS and the more long-lived metabolite hydrogen peroxide, had a regulatory role in autoimmune responses. These findings in animal models for various diseases posed a question on how Ncf1 regulates autoimmune diseases in humans. It is not an easy task to answer the question in humans as the Ncf1 locus has not been sequenced due to multiple copy numbers. RH set out to make an assay to measure copy numbers and also to sequence all exons to identify SNPs. RH identified that one of the SNPs (NCF1-339T) could reduce the ROS production by the NOX2 complex2, showing that this SNP was by far the strongest locus associated with lupus3. Further investigations are needed how the biological pathways lead to chronic inflammation and how environmental factors interact with the ROS.

The experience of lung metastatic study

The lung metastasis of some tumor cells was known to be suppressed in Ncf1 mutant mice when RH moved from Lund University to Karolinska Institute. Jianghong Zhong (JZ), a Chinese-born Swedish scientist specializing in molecular imaging, joined the Holmdahl lab at Karolinska Institute in 2012. JZ continued the Ncf1 projects, whereas he found a protective role of ROS by innate immunity in mouse models for psoriasis4, RA, and MS. It was challenging for JZ to find out what type of Ncf1-expressing cells takes an important role in tumor models. It took more than three years for JZ to prepare the Ncf1-mutant mouse strains with deficiencies of T cells, B cells, neutrophils, and monocytes/macrophages on the shared B6 genetic background. Meanwhile, JZ also bred the new Ncf1-mutant mouse strains carrying the MHC haplotypes b, q, p, and r. JZ used these mouse models, finding that it is the neutrophil that mediates immune responses against lung colonization in the absence of NOX2-derived ROS. In contrast to the dogma, the Ncf1 mutation-mediated protection was consistent regardless of the MHC haplotype. It has taken 8 years for JZ to publish this work5, followed by two PhD students Qijing Li and Huqiao Luo in Karolinska Institute. The complete work is supported by both Karolinska Institute and Beihang Unversity, where JZ is an associate professor of medical inflammation imaging, leading an independent startup group to continue the study of ROS in Beijing. 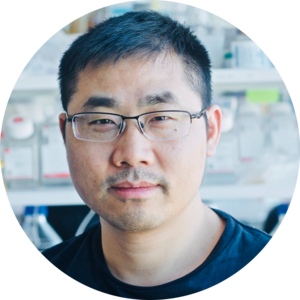 Jianghong Zhong is an associate professor of medical inflammation imaging at Beihang University, China. He has a PhD in pattern recognition and intelligent system from the Chinese Academy of Sciences and has been working on medical inflammation research previously at Karolinska Institute for 8 years.