Tau pathology: Piecing the Puzzle together

Tau is a microtubule-associated protein with many physiological functions, including modifying microtubule stability, neuronal morphology, vesicle transport and trafficking (1,2). Tau dysfunction contributes to a number of diseases, termed tauopathies, either as the primary causative agent (e.g., Pick’s disease) or as a component of the neuropathology (e.g., Alzheimer’s disease). In Alzheimer’s disease, abnormally phosphorylated tau dissociates from microtubules and aggregates to form oligomers and fibrils, accumulating in the soma-dendritic compartment. Tau can further aggregate to form neurofibrillary tangles (NFTs), whose abundance correlates with disease progression (3,4). However, it appears that the soluble tau oligomers (oTau) are the most bioactive, in terms of disrupting neuronal function. Indeed, the toxic effects of tau oligomers can occur in the absence of NFT pathology (5–7). Although the toxicity of oTau is now well established, the mechanistic basis of oTau actions on neuronal function are poorly understood.

Electrophysiological studies have revealed several pathological mechanisms for the actions of full length (FL) oTau, including alterations in neuronal excitability and changes in short- and long-term synaptic plasticity (8–11). Viral introduction and transgenic models are commonly used to explore the roles of oTau in pathology (5–7). While these methods generate valuable data, they provide little information on the concentration and structural conformations of oTau that are responsible for the neurotoxic effects. For other approaches, such as the extracellular application of oTau to tissue or cell cultures (12–14), cellular uptake may be the limiting step, reducing the observed toxicity.

To address these limitations, we have used whole-cell patch-clamp recording to introduce oTau into single neurons and has enabled specific targeting to either pre- or post-synaptic cells (8,15). This approach only requires small amounts of oligomers, each cell acts as its own control and electrophysiological alterations can be observed in real time. Furthermore, direct comparisons can be made between different concentrations and structural conformations of the oTau introduced. Using this approach, we have previously demonstrated that full-length (FL, prepared from recombinant full-length human tau 1-441) oTau (44-444 nM) modifies the excitability (as measured by a change in firing rate), input resistance and action potential waveform of CA1 pyramidal neurons.

We hypothesized that using specific truncations of the tau molecule, we would be able to dissect apart these effects, which would help in identifying the underlying mechanisms. We therefore created truncated versions of tau, informed by a physiologically relevant truncation at amino acid 123 that was recently discovered in AD patients. We used oligomers formed from tau lacking the N-terminal region (aa 124-441; CFRAG) and soluble aggregates of the non-oligomer forming N-terminal fragment (aa 1-123; NFRAG).

We found that CFRAG-oTau did not replicate the effects on action potential kinetics or input resistance that were observed with FL-oTau but did still increase firing rate. We then showed that this firing rate increase is mediated by a reduction in the minimum current required to elicit an action potential, which in turn results from a reduction in the spike initiation threshold. Thus, the neurons become more excitable.

Conversely, we found that NFRAG-Tau aggregates changed the action potential height and width without increasing input resistance or excitability. Surprisingly, NFRAG monomers produced comparable changes to action potentials. Thus, the effects of NFRAG are likely to be unrelated to its quaternary structure and instead maybe associated with a specific sequence within the NFRAG tau.

Given the nature of the changes in action potential waveform and excitability, we hypothesised that tau might be interacting with voltage-gated sodium channels and altering their function. We adapted a published protocol to allow us to record voltage gated sodium currents in acute slices. We found that FL-oTau had three effects on sodium channel currents: Firstly, the half activation was reduced, reflecting the increase in neuronal excitability, consistent with the effects of CFRAG-oTau.  Secondly, the rate of activation was reduced underlying the slower action potential rise, consistent with the effects of NFRAG-tau. Finally, FL-oTau reduced the maximum sodium conductance by ~ two thirds. To investigate the effects this would have on the AP, we implemented a simplified action potential model (16). Reducing the maximum sodium conductance had effects that replicated our data (reduced action potential amplitude and change to threshold).

This simple, yet highly effective technique of introducing structurally defined aggregated proteins into single neurons has allowed us to study the actions of tau with unparalleled levels of detail and provides a unique opportunity to understand the underlying pathology for tauopathies. By truncating the tau molecule, we have probed the mechanisms that underlie tau dysfunction, and this increased understanding of tau’s pathological actions will build towards developing future tau-targeting therapies. 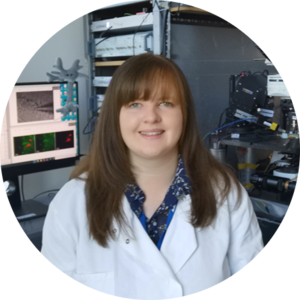