Figure 1. The therapeutic function and mechanism of mannose in intestinal inflammation (drawn by Miss. Dengyang Wu from China Academy of Art).

The intestinal tract is a complex ecosystem where numerous types of cells coexist in an intertwined, highly organized manner. The functional equilibrium of the intestine relies on the proper crosstalk and cooperation among each cell population. Our recent review has indicated that the pathogenic interaction between macrophages and intestinal epithelial cells contributes substantially to the initiation, progression, and recovery of intestinal inflmmation1. Briefly, the compromised epithelial integrity permits the invasion of gut microbiota into lamina propria, leading to the activation of intestinal macrophages, which secrete inflammatory cytokines to further damage the epithelium. How to prevent this pathological vicious circle is crucial for the targeted treatment of inflammatory bowel disease (IBD).

In recent years, the immunomodulatory roles of dietary sugars, particularly hexoses, have attracted great attention from researchers. Evidence has indicated that glucose and fructose aggravated the development of colitis2, 3. In our recent work in Cellular & Molecular Immunology (https://www.nature.com/articles/s41423-022-00955-1), we revealed the anti-colitic function of mannose and provided several mechanistic insights.

As a common dietary hexose, mannose exists in high amounts in many fruits and vegetables such as cranberries, peaches, eggplants and green beans. Although mannose has already been marketed as a dietary supplement for the treatment of urinary tract infection by preventing bacterial adherence to urinary tract, the physiopathological significance of mannose have long been neglected. In our study, mannose supplementation was found to exhibit prominent anti-inflammatory effect in multiple murine colitis models. Through further dissecting the cell-specific action of mannose, we revealed that mannose prevented the endoplasmic reticulum stress (ERS)-induced IEC apoptosis via normalizing protein N-glycosylation. Notably, the FDA-approved ERS suppressors, such as tauroursodeoxycholate (TUDCA) or 4-phenylbutyrate (PBA), have been used in the treatment of IBD through protecting IECs from inflammation-induced death4. Therefore, mannose might be utilized as an alternative, natural ERS suppressor to prevent the “leaky gut”.

Different from IECs, mannose did not change the ERS in macrophages. On the other hand, mannose reduced the production of TNF-α, the most IBD-relevant cytokine, in colonic macrophages. In contrast to previous studies, the anti-inflammatory function of mannose is independent of its binding to mannose receptor5. Metabolomics analysis showed that mannose decreased the levels of several glycolysis metabolites, with glyceraldehyde 3-phosphate (G3P) showing the most prominent downregulation. Thus, GAPDH was liberated from G3P to bind to TNF-α mRNA and acted as a translational repressor in mannose-treated macrophages. Intriguingly, we discovered that TNF-α could induce ERS in IECs, a process that can be ameliorated by mannose to prevent bacterial invasion and the subsequent inflammatory activation of colonic macrophages. Therefore, the anti-ERS and anti-inflammatory properties of mannose synergistically confer the protection against colitis.

From a clinical perspective, we discovered that serum concentration of mannose was higher in IBD patients than that in healthy subjects, this phenomenon might reflect the impaired absorption or catabolism in the inflammed gut.

Collectively, our work suggest that mannose supplementation might serve as a promising approach in IBD treatment. The advantageous characteristics of mannose utilization would be tasty, low price, high availability, and high safety. 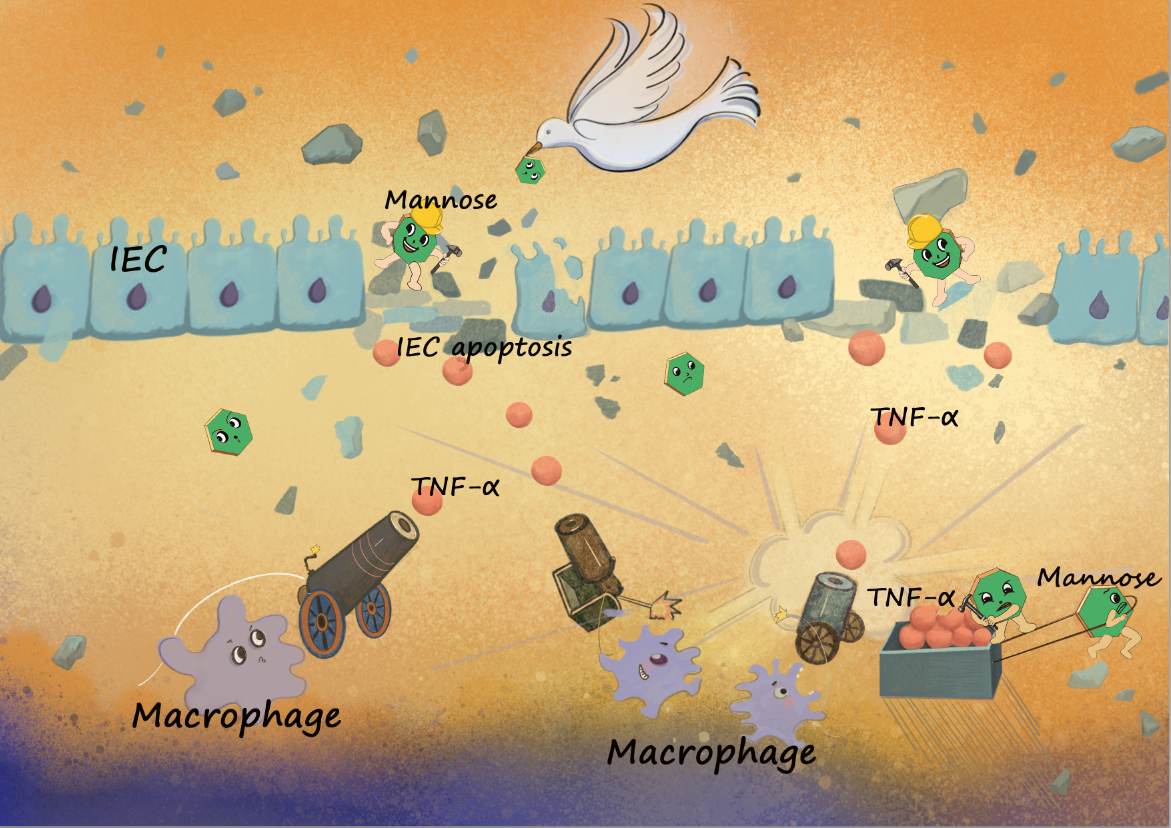