Organophosphate poisoning has become a worldwide health concern. Evidence indicates that mitochondrial dysfunction might play an important role in the development of neurodegeneration. Here, we tested a novel mitochondrially targeted therapy as treatment for organophosphate induced metabolic crisis.
Sarah Piel
Scientist, The Children's Hospital of Philadelphia
Follow
Like Liked by Evelina Satkevic
0

During my PhD at Lund University, I evaluated succinate prodrugs as potential treatment for drug-induced mitochondrial dysfunction. The succinate prodrugs were originally developed as therapeutic for genetic mitochondrial disease, with mitochondrial complex I being most commonly affected. Because succinate is used for energy production by mitochondrial complex II it can bypass complex I and serve as an alternative energy substrate. Mitochondria are a common target for a wide range of chemicals, such as organophosphates, and highly metabolic tissues are often a target of drug-related toxicities. Therefore, acute intoxication due to intentional or accidental exposure presents an additional target indication which can benefit from this pharmaceutical concept.

At the Children’s Hospital of Philadelphia (CHOP) and under the lead of Todd Kilbaugh, Associate Professor of Anaesthesiology, Critical Care, and Paediatrics, we have started to develop a multi-species pre-clinical toxicology and drug development platform to evaluate mitochondrial-targeted therapeutics as treatment for metabolic dysfunction due to chemical exposure. This toxicology program started in 2017 and is part of the NIH funded initiative CounterACT with the mission to support research and development of therapeutics that can mitigate the health effects of toxic chemicals, including traditional chemical warfare agents, toxic industrial chemicals, and pesticides. The succinate prodrugs is the first pharmacological strategy that is evaluated using this platform. We started off with cellular models of organophosphate, carbamate and Sodium Fluoroacetate poisoning, where we were able to improve mitochondrial function in vitro with the succinate prodrugs.1 Currently, we are leading this new drug class further down the pipeline and are testing the succinate prodrugs in experimental rodent models acute chemical exposure. The most recent of our work on ‘Succinate prodrugs in combination with atropine and pralidoxime protect cerebral mitochondrial function in a rodent model of acute organophosphate poisoning’ is available in the related content to this blog post.

Acute pesticide poisoning has become a worldwide health concern, with hundreds of millions of cases of acute poisoning worldwide each year.2-5 Anticholinergic compounds, such as organophosphates (OPs), are responsible for the majority of all pesticide-related deaths.6 Nerve agents of the organophosphate (OP) compound class pose an additional threat to our society and this threat has become even more evident in recent years. Sarin gas has been used in the Syrian civil war, A-234, a so called Novichok agent, was used in the Salisbury attack in 2018 and North Korean agents used VX gas in the murder of Kim Jong-Nam at the Kuala Lumpur airport in 2017. Death from acute OP poisoning is primarily due to respiratory failure, with survivors often demonstrating significant neurologic sequelae.7-9 Current standard of care (SOC) treatment for acute OP poisoning consists of supportive critical care and anticholinergic drugs, such as atropine and pralidoxime.6,10 While SOC treatment may alleviate acute symptoms and reduce short term mortality, survivors are at risk for development of significant cognitive and motor function deficits.6,11,12

The immediate lethal potential of OPs is due to their acetylcholinesterase inhibitory effects. However, an increasing body of evidence indicates that there are other important pathways that may contribute to the overall toxicity and development of neurodegeneration of these agents. Mitochondrial dysfunction has been reported as one of the primary non-cholinergic toxic effects of OPs.13 Targeting these effects with mitochondrially directed therapeutics, such as succinate prodrugs, to support mitochondrial function presents a novel treatment approach. Succinate prodrugs do not act on OPs themselves but act as a countermeasure to compensate for the mitochondrial toxicity.14 Prodrugs of succinate more easily pass through the cell membrane than regular succinate and can be directly metabolized through mitochondrial complex II of the oxidative phosphorylation system, thereby increasing mitochondrial ATP production.1,14-17 Additional studies have demonstrated that the succinate prodrugs are also able to support impaired mitochondrial respiration due to partial mitochondrial CIV inhibition, despite the site of toxicity being downstream of the target of the succinate prodrugs.1,14-18

Based on these promising results we believe that further studies are warranted to investigate the potential of this novel drug class as preventive measure for the development of long-term cognitive- and motor function deficits following OP exposure. Furthermore, we will continue to build our multi-species pre-clinical toxicology and drug development platform to evaluate this and other novel mitochondrial-targeted therapeutics as treatment for metabolic dysfunction due to chemical exposure. This will not only include the development of more high-throughput models for large drug screens to bridge the gap between our cellular and rodent models, but also the addition of porcine models, which allows a close simulation of the clinical care setting. 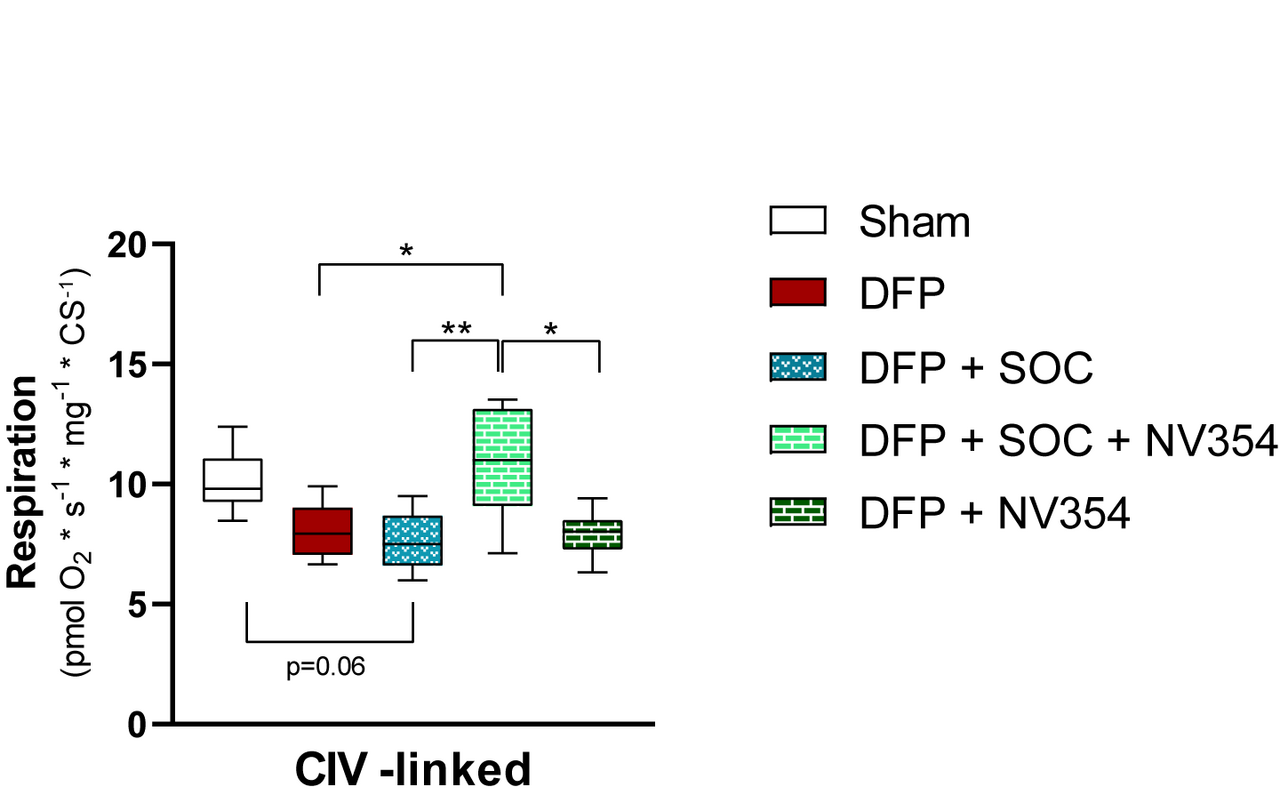 Organophosphate poisoning has become a worldwide health concern. Evidence indicates that mitochondrial dysfunction might play an important role in the development of neurodegeneration. Here, we tested a novel mitochondrially targeted therapy as treatment for organophosphate induced metabolic crisis.