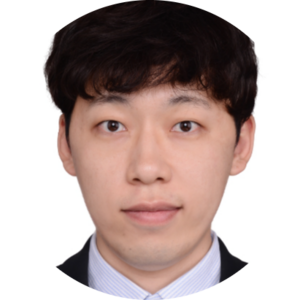 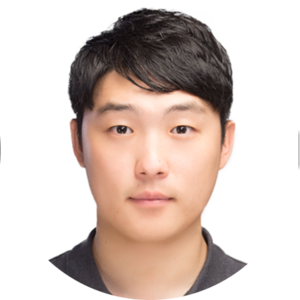 Intravitreal anti-vascular endothelial growth factor (VEGF) drugs are the standard treatment for neovascular age-related macular degeneration (AMD) as intraocular VEGF secreted by vascular/extravascular components is one of the strongest inducers of ocular angiogenesis1-5. However, many patients suffer from incomplete or non-response to anti-VEGF therapy. In addition, repeated intravitreal injections of anti-VEGF agents can lead to persistent intraretinal and subretinal fluid, unresolved new hemorrhage, progressive subretinal fibrosis, and limited or poor vision. Therefore, measures additional to anti-VEGF therapy are urgently needed for AMD.

Among the several molecules that involved in the development of ocular neovascularization (NV), platelet-derived growth factor-BB (PDGF-BB) is the predominant isoform of PDGF in the ocular system, which is primarily expressed by vascular endothelial cells6-8, and PDGF receptor β (PDGFRβ) is commonly expressed on pericytes, smooth muscle cells, vascular endothelial cells, and retinal pigment epithelium9-11. The ligand/receptor pair of PDGF-BB/PDGFRβ induces the recruitment of pericytes to neovessels, which then cover these vessels12. This pair also induces the secretion of VEGF and other cell survival factors from pericytes7,13,14. Subsequently, these protective functions of pericytes enable endothelial cell survival independent of VEGF, rendering anti-VEGF therapy less efficient15-18.

In the laser-induced choroidal neovascularization (CNV) model which is the most implemented method in multiple species to study neovascular AMD, laser injury promotes the migration of pericyte-like cells into the area of CNV lesions and induces their proliferation, leading to the expression of markers such as smooth muscle actin and PDGFRβ19,20. Afterwards, the infiltrated pericyte-like cells form a scaffold for subsequent vascular endothelial cell infiltration to complete the neovascularization process21. In animal models, PDGF-BB/PDGFRβ signaling inhibitors have demonstrated additive benefits for suppressing CNV when employed in combination with anti-VEGF agents21,22.

Consequently, PDGF and PDGFRβ targeting medications in combination with anti-VEGF medications were tested in human. But in CAPELLA phase II trial with rinucumab/aflibercept combination as well as in phase 3 trial investigating the efficacy of E10030 and ranibizumab combination, visual or anatomical advantage was not evident over anti-VEGF monotherapy. There is no clear reason to explain these failures. But previous studies reported an inverse correlation between concentrations of PDGF/PDGFRβ and VEGF during anti-VEGF treatments23-25 as well as excessive coverage of PDGFRβ-positive cells in CNV lesions of patients resistant to anti-VEGF therapy26.  We hypothesized that therapy combining PDGF/PDGFR signaling inhibitors with anti-VEGF agents is insufficient to effectively ablate pericytes and inhibit the PDGF/PDGFR-related signaling pathway in the pathologic ocular environment.

Antibody-drug conjugates (ADCs) are monoclonal antibodies linked to cytotoxic effector molecules that induce cell death upon binding and internalization of the antibody by the target cell. After development of efficiently internalizing anti-PDGFRb antibody, we tested whether specific delivery of cytotoxic reagents to PDGFRβ-overexpressing cells are effective in reducing pathologic ocular NV. For the test, we employed two mouse models: oxygen-induced retinopathy (OIR) and laser-induced choroidal neovascularization (LI-CNV) mimicking retinopathy of prematurity and neovascular AMD, respectively. ADC targeting PDGFRβ remarkably inhibited progression of the avascular area and neovascular tufts in the OIR and CNV lesions. Additionally, we did not observe functional as well as anatomical toxicity like retinal cell death, vascular abnormalities, and vascular leakages reflecting breakdown of blood-retinal barrier following the treatment.

Our results suggest that removing PDGFRβ-expressing pericytes by an ADC targeting PDGFRβ could be a potential therapeutic strategy for pathologic ocular neovascularization. 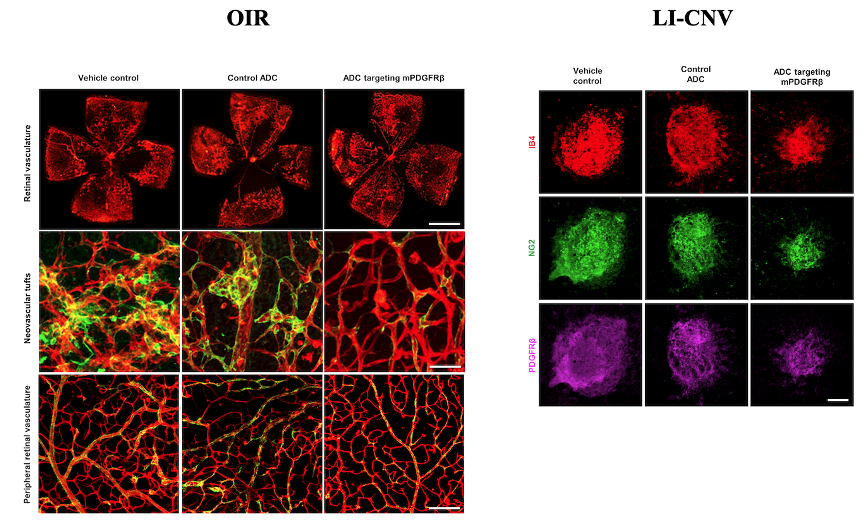 A modular super-enhancer in retinal development