Many diseases of the surface of the eye have a different prevalence between men and women. In the conjunctival goblet cells, sex hormones attenuate the cellular response to a potent inflammatory mediator LTB4; meanwhile the cellular response is more robust to a pro-resolving mediator LXA4 in males.
Menglu Yang and Darlene A Dartt
2 contributors
Like Liked by Evelina Satkevic and 2 others
0

The different prevalence of ocular (eye) surface (cornea and conjunctiva) diseases between men and women is widely reported by clinical studies. In general, women are more susceptible to dry eye disease1, and more antihistamine (allergy) medicines were prescribed to women2. For many years, clinicians and scientists were trying to understand the reason for this difference. Various mechanisms have been discovered in multiple components of the eye surface at numerous biological levels, from the tear film to the cornea, and from the regulation of sex hormones levels to the characteristics of the cell itself due to different x and y-chromosomes3.

Conjunctiva is the largest mucosal membrane of the eye surface that covers the white part of the eye surrounding the cornea that continues to the inner side of the eyelids. A major cell type that makes up of the conjunctiva is called conjunctival goblet cells4, however, very little is known about the sex-based differences of this cell type. As the name indicates, the goblet cell resembles a goblet, and the “drink” inside the cup is a type of secretory gel-forming mucin, named MUC5AC. Mucin forms the inner layer of the tear film which overspreads the eye surface to moisturize and protect the eye surface from the outside environment5. Homeostasis of the mucin secretion is essential for a healthy eye surface. In health, the goblet cells secrete mucin when stimulated by activation of the surrounding nerve endings to maintain a basal level of tear mucin. Too little mucin secretion either due to a decreased number or function of goblet cells or insufficient nerve stimulation is related to dry eye disease. In contrast, when the conjunctiva is challenged by allergens or pathogens, the overactive goblet cells will secrete excessive mucin that causes sticky and itchy eyes4 (Figure 1). The excessive secretion can be stimulated by a group of molecules such as histamine, leukotrienes, cytokines and others5. In this study, we described the sex-based differences of the human goblet cells under three different conditions: health, allergy and other inflammatory diseases, with or without the presence of sex hormones.

Figure 1: The normal structure of ocular surface and goblet cell secretion in health and disease. The ocular surface is made up of the cornea (shown as the dome-shaped structure in the center), conjunctiva (shown as the blue membranous structure on each side), and the tear film that covers both structures. Conjunctival goblet cells are distributed throughout the conjunctiva (shown in green), polarized with the secretory granules closer to the outer surface of the conjunctiva. In health, the goblet cells maintain a basal mucin secretion level (shown as blue spheres) to moisturize and lubricate the ocular surface; when exposed to pathogens or allergens, the overactive goblet cells will secrete excessive mucin (shown as red spheres) that causes sticky and itchy eyes. Created by Biorender.

First of all we cultured primary human conjunctival goblet cells from conjunctival tissue. We then stimulated the goblet cells with a neurotransmitter analog carbachol to mimic the physiological stimulation of mucin secretion. Because the mucin secretion induced by carbachol is tightly regulated by the intracellular [Ca2+] ([Ca2+]i) signal, we recorded the [Ca2+]i before and after the addition of carbachol. The change in [Ca2+]i  indicates the activation of the goblet cells, which reflects the level of mucin secretion. The only sex-based difference we found is a greater response to carbachol by female goblet cells at a high carbachol concentration (10-3M). We then stimulated male and female cells with a well-known allergic mediator histamine, and a potent inflammatory mediator leukotriene B4 (LTB4) to evaluate if there is any sex-based difference in the inflamed state, but no difference was observed with the absence of either sex hormone.

We next introduced different sex hormones to the experiment. For androgen, we used dihydrotestosterone (DHT) as this compound cannot be further biosynthesized to estrogen, compared to testosterone. For estrogen, we used two types of estrogens: estrone (E1) and 17-β-estradiol (E2). We added the sex hormones individually into cultured goblet cells one day before the experiment and then measured the [Ca2+]i  level before and after the addition of carbachol. The result showed that sex hormones had no effect on the response to carbachol. A similar result was obtained with histamine stimulation. In contrast, we found all sex hormones inhibited the goblet cell Ca2+ response to LTB4 in females, while DHT and E2 inhibited the goblet cell Ca2+ response to LTB4 in males. From these results, we learned that conjunctival goblet cell response to neurotransmitters (in health) and histamine (in allergy) is not altered by sex or sex hormones. Although the cellular response to LTB4 is not different between goblet cells cultured from males and females, sex hormones are able to attenuate the LTB4-stimulated Ca2+ response. As LTB4 is a general inflammatory mediator, this might explain why most ocular surface diseases occur in post-menopausal women whose sex hormones are decreased.

Besides the initiation of inflammation, we also explored the resolution of inflammation. Previously the termination of the inflammation was thought to be a passive process, but more recent evidence all indicated that inflammation is actively terminated by a family of specialized pro-resolving mediators (SPMs) that are biosynthesized and released by cells from the inflammation site from omega 6 and omega 3 fatty acids6. There are multiple families of SPMs identified, including lipoxins (LX), resolvins (Rv), maresins (Mar), and protectins. These mediators block the recruitment of the neutrophils to the inflammation site, stimulate macrophages to clean up the infiltrating inflammatory cells, and reduce scar formation.  We previously observed that multiple SPMs are present in human emotional tears with different sex-based concentrations7. Therefore, in the current study, we studied the cellular response to three of the major SPMs found in human tears, RvD1, RvD2 and LXA4. We found that goblet cells from male individuals respond more robustly than females to LXA4, but not to RvD1 or RvD2. LXA4 is an essential lipid mediator, regarded as the “jump start” of the resolution of inflammation8. In acute inflammation, if the initial resolution fails, the acute inflammation may turn chronic9. Therefore, our findings indicate active resolution of inflammation may begin earlier in males than in females, which also explains the higher prevalence of chronic eye surface inflammation in women.

+1
Multiple Contributors
Menglu Yang and Darlene A Dartt
View all 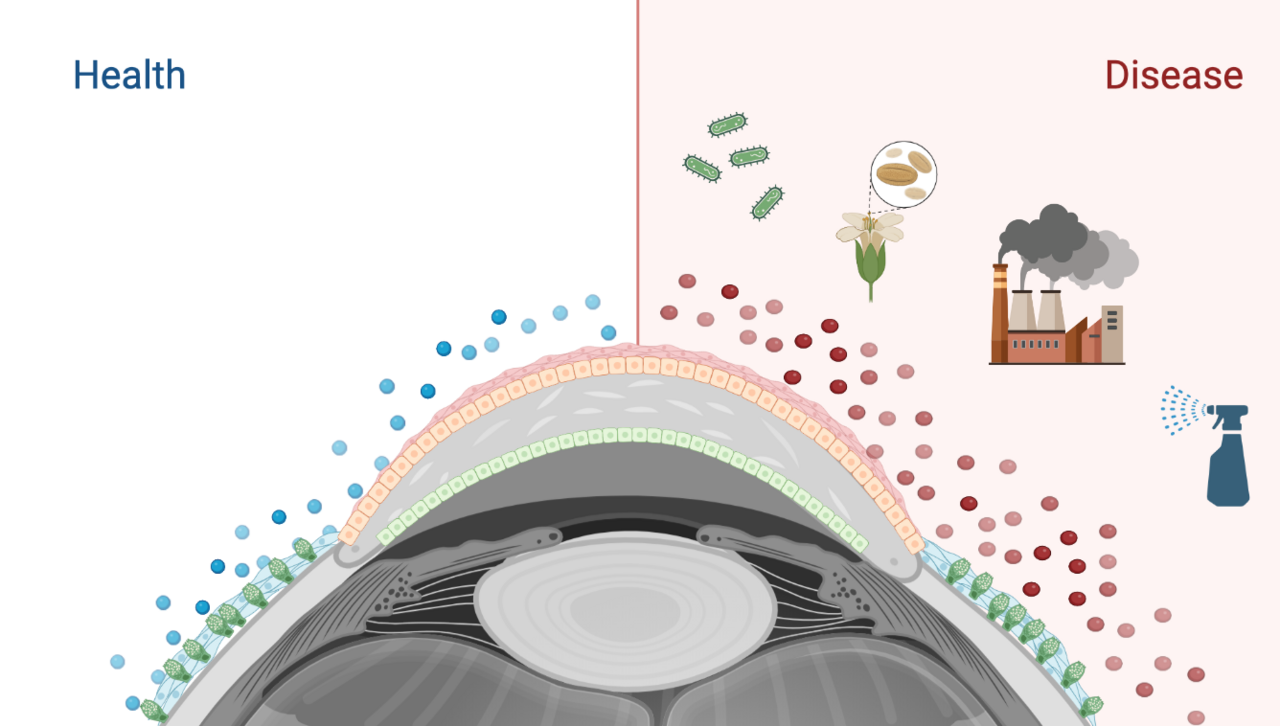