Amyotrophic lateral sclerosis (ALS) is a fatal disease caused by the progressive degeneration of motor neurons, which are the specific nerve cells that innervate body musculature [1]. Some patients with a particularly aggressive and juvenile form of ALS carry mutations in proteins that exert their functions by binding RNA molecules (RNA-binding proteins), including mutations that affect the nuclear localization of the FUS RBP [2]. RBPs are involved in several aspects of RNA metabolism, such as transcription, localization, function, and turnover of RNA molecules, acting in both in the nucleus and in the cytoplasmic compartments [3]. Supposedly, ALS mutations alter these functions, exerting toxicity and triggering motor neuron degeneration [4].

Despite a recent increase in our knowledge of the genetics of ALS, the disease mechanisms downstream of mutations in ALS genes remain largely uncharacterized.

We have recently identified a new RBP involved in ALS, known as HuD or ELAVL4 [5-6]. HuD is a neuron-specific RBP that plays a role in neuron-specific RNA processing and neuronal physiology, regulating the expression levels of genes involved in cell growth and differentiation. We have found aberrantly increased HuD levels in FUS mutant motor neurons due to microRNA-mediated effects and direct binding of mutant FUS to the HuD 3’UTR [6]. We have also extended this evidence to other proteins involved in trafficking and cytoskeleton remodeling [7], suggesting that aberrant targeting of 3′UTRs by mutant FUS likely represents a broad mechanism underlying proteome alteration in motor neurons.

In order to define the molecular mechanisms and functional consequences of HuD and mutant FUS interplay in ALS, we took advantage of spinal motor neurons obtained from FUS mutant human induced pluripotent stem cells (iPSCs) [9-10] or from a FUS mouse model [11]. We found that the mutant FUS protein intrude with the functions of FMRP, which we characterized as a novel regulator of HuD. In healthy motor neurons, FUS is confined in the nucleus and FMRP negatively regulates HuD translation. In ALS motor neurons, however, cytoplasmic mislocalization of mutant FUS undermines the FMRP negative role by competing for HuD 3’UTR binding, causing aberrant increase of HuD protein levels. Thus, a real struggle for HuD mRNA grasping between mutant FUS and FMRP determinates the levels of HuD protein (Figure 1). 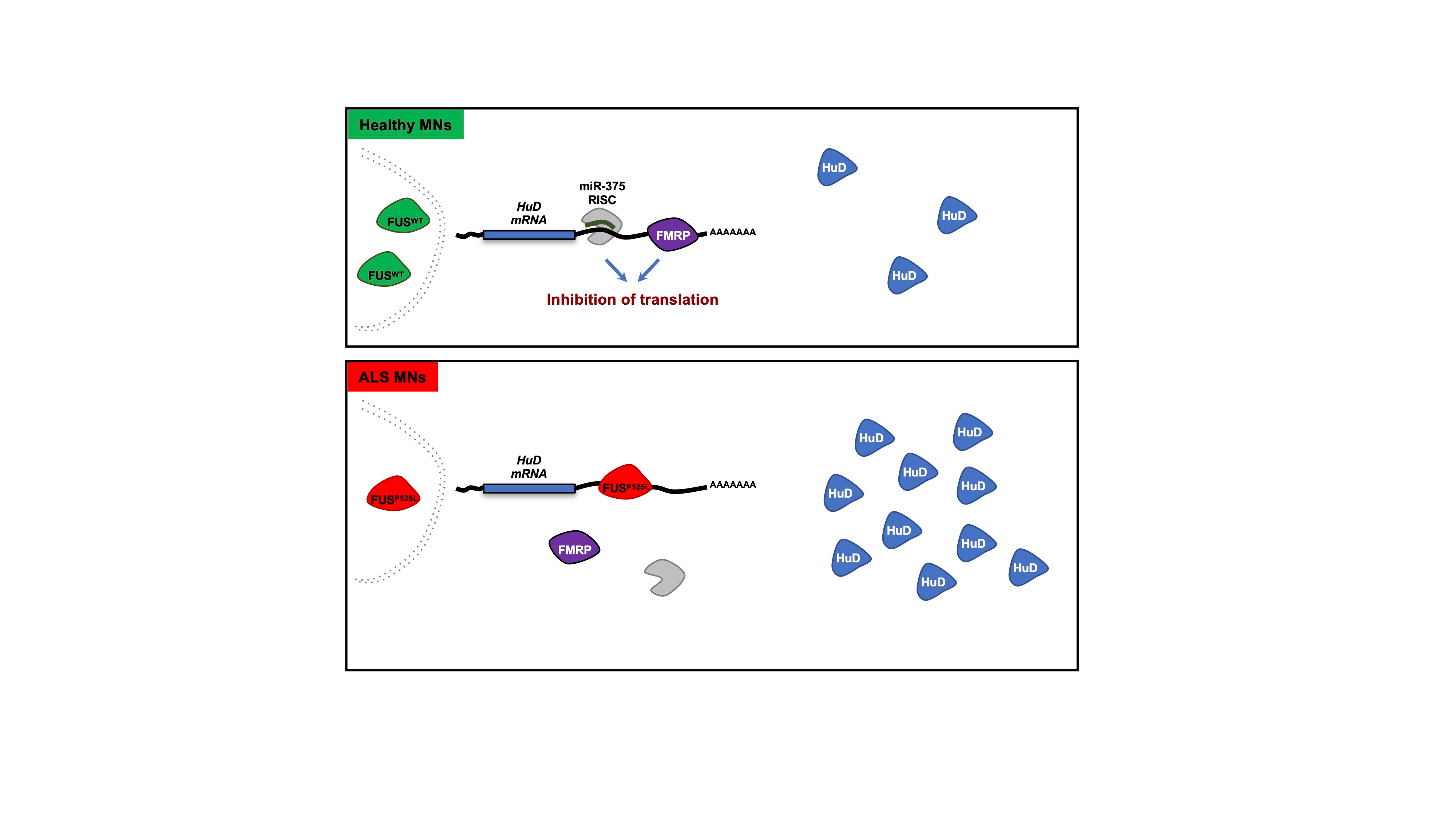 As a consequence of increased HuD protein levels, two key HuD targets are increased and differently localized: NRN1 and GAP43.

It is known that NRN1 overexpression is associated with increased axonal outgrowth and neurite branching [12], while GAP43 is upregulated downstream of increased HuD during axon regeneration upon sciatic nerve injury [13].

We therefore took advantage of microfluidic devices to investigate FUS-ALS motor neurons axonal morphology. Strikingly, we found increased axon branches and branch points and faster growth upon injury in FUS mutant compared to WT (Figure 2A-B). We showed that this phenotype is a consequence of increased NRN1, since upon dampening NRN1 levels in FUS mutant cells we observed a reduced number of axon branches and junctions and reduced axon growth after regeneration (Figure 2C-D). Collectively, our work suggests that a mutation that impairs the nuclear localization of FUS may trigger a domino effect onto other RBPs in ALS motor neurons: HuD escapes from negative regulation by FMRP, and the resulting increased of HuD protein levels causes aberrant axon branching and growth phenotypes through NRN1.

Important scientific research is ongoing to elucidate the complex molecular mechanisms underlying ALS, and our work takes part in this effort.

As a result, our research, along with all other, will contribute to pinpoint potential therapeutic targets for the treatment of ALS. 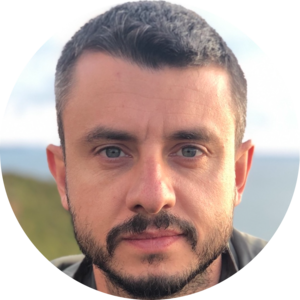