Hailan Liu, yanghe5 & baij022518
3 contributors
Like Liked by Evelina Satkevic and 1 other
0

Grb10, an adaptor protein known to regulate insulin signalling, can interact with the leptin receptor for enhancement of leptin signalling in hypothalamic AgRP and POMC neurons in mice.

Obesity is increasing at an alarming rate, but effective therapies are lacking due to the incomplete understanding of its underlying mechanisms. Leptin is a hormone primarily secreted by white adipocytes that helps to maintain energy balance by inhibiting hunger and enhancing energy utilization. Particularly, leptin acts on hypothalamic neurons expressing agouti-related protein (AgRP) and pro-opiomelanocortin (POMC) to regulate energy homeostasis. However, owing to leptin resistance, interventions that increase leptin levels are often ineffective in most cases of diet-induced obesity. Therefore, an alternative strategy to combat the current obesity epidemic is to improve leptin sensitivity. From this perspective, identifying the intracellular molecules that can amplify leptin signaling is of great importance.

The growth factor receptor binding protein 10 (Grb10) was originally identified by us and others as a Pleckstrin homology (PH) and a Src-homology-2 (SH2) domain-containing adaptor protein that binds to insulin, Ret, and EGF receptors. Subsequent studies found that Grb10 can also interact with a variety of intracellular signaling proteins to modulate the activity of various signaling pathways. A remaining but important question is whether Grb10 can interact with the leptin receptor (LepR) and regulate leptin signaling.

In this study, we first used the yeast two-hybrid assay and immunoprecipitation study to confirm the interaction between Grb10 and LepR. We further found that overexpression of Grb10 enhances leptin-induced phosphorylation of downstream signaling proteins, e.g., JAK2 and STAT3, in hypothalamic GT1-7 cells, while suppressing Grb10 expression produces the opposite effects. Therefore, we revealed Grb10 as a positive modulator of leptin signaling. Unlike other well-known molecules that regulate leptin signaling, such as SH2B1, PTP1B and SOCS3, Grb10 acts on the most upstream of leptin signaling by interacting with LepR via a SH2/phosphotyrosine binding-independent mechanism, making it an attractive target in ameliorating leptin resistance in the context of obesity.

Considering the indispensable roles of AgRP and POMC neurons in mediating leptin effects, we employed the Cre-LoxP, CRISPR-Cas9 and viral approaches to create gain- and loss-of-function mouse models to manipulate Grb10 expression specifically in AgRP or POMC neurons. Ablation of Grb10 in AgRP neurons promotes weight gain by attenuating energy expenditure, which is associated with diminished leptin sensitivity of AgRP neurons. By contrast, Grb10 overexpression in AgRP neurons provokes weight loss by increasing heat production, which is accompanied by enhanced leptin sensitivity of AgRP neurons. More specifically, leptin-evoked hyperpolarization of AgRP neurons was facilitated by Grb10 overexpression but blunted by Grb10 deletion via regulating KATP currents. Through the administration of the JAK2 inhibitor, AG-490, we further uncovered that the regulation of KATP currents by Grb10 is mediated by JAK2.

Similarly, disruption of Grb10 in POMC neurons exaggerates diet-induced obesity via enhancing appetite and attenuating energy expenditure, which is associated with diminished leptin sensitivity of POMC neurons. In opposite, Grb10 overexpression in POMC neurons alleviated diet-induced obesity via suppressing feeding and promoting energy utilization, as a result of enhanced leptin sensitivity of POMC neurons. Particularly, leptin-evoked depolarization of POMC neurons was facilitated by Grb10 overexpression but blunted by Grb10 deletion via regulating TRPC currents. AG-490 blocked the effects of Grb10 on TRPC currents upon leptin treatment, suggesting that Grb10-mediated regulation of TRPC currents relies on JAK2.

Taken together, we identified Grb10 as a critical positive modulator of hypothalamic leptin signaling and function, which contributes to the maintenance of energy homeostasis by enhancing the response of AgRP and POMC neurons to leptin.

Figure 1: Grb10 interacts with LepR and enhances leptin signaling. In AgRP neurons, Grb10 facilitates leptin-elicited phosphorylation of STAT3 and amplification of KATP currents, leading to the hyperpolarization of AgRP neurons. In POMC neurons, Grb10 facilitates leptin-evoked phosphorylation of STAT3 and amplification of TRPC channels, resulting in the depolarization of POMC neurons. Grb10 regulates the response of AgRP and POMC neurons to leptin to maintain energy balance. 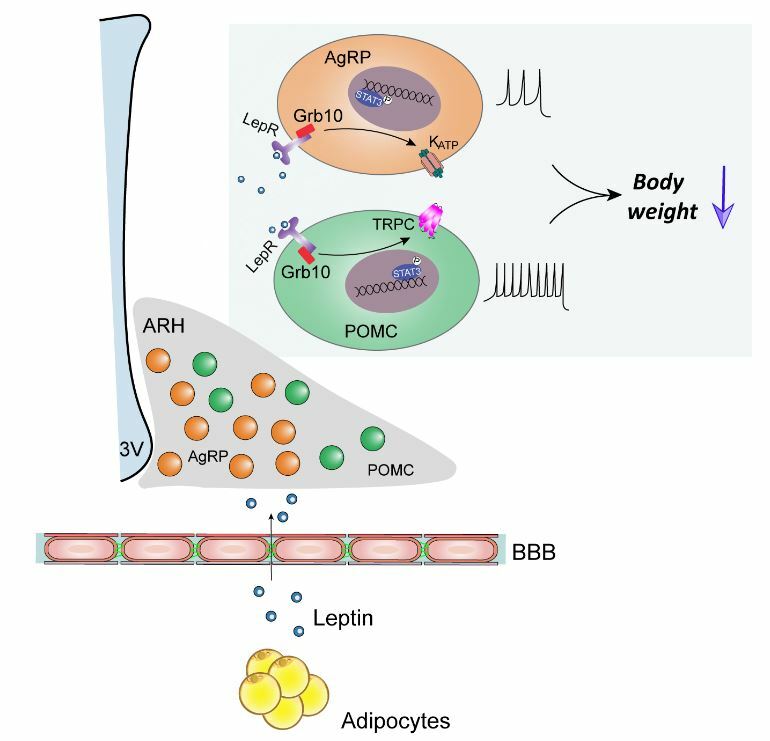