The gastrointestinal (GI) tract evolved with its own nervous system (the Enteric Nervous System, ENS), that we suggest is the first brain. That is, it evolved before the brain and spinal cord. We reveal a major new mechanism showing how the first brain (the ENS) causes propulsion along the colon.

The gastrointestinal (GI) tract is the only internal organ to have evolved over hundreds of millions of years with its own nervous system, called the Enteric Nervous System (ENS). Activity from the ENS alone is sufficient to generate complex motor patterns that propel content along the GI-tract. Animals like Hydra, have been around for over 600 million years with an intrinsic nervous system, but no brain or spinal cord, as we know it. Hydra still exist today and despite the lack of brain or spinal cord, demonstrate complex movements (like peristalsis and propulsion of ingested content), without conscious thought. They only use their intrinsic nervous system. Hence, we suggest the brain in the gut is the first brain, because it clearly evolved before the complex brain, that we have evolved to use much more recently every day to control our voluntary movements, such as walking and talking.

The ENS in the gut consists of many hundreds of thousands of neurons that are contained in small ganglia that form an interconnected network (the largest called the myenteric plexus), where each ganglion consists of a heterogenous population of neurons. This means any individual ganglion (within the ENS) contains a mixed population of neurons, which could be an intrinsic sensory neuron, an interneuron, or excitatory or inhibitory motor neuron.

One of the most challenging questions that has faced enteric neuroscientists is how all the different classes of neurons are temporally and spatially activated to generate complex patterns of motor activity, that underlie propulsion along the gut. In this study, we provide a major new insight into how all the different neurochemical classes of myenteric neurons are temporally and spatially activated along the colon, to generate propulsive contractions (Spencer, 2021). Interestingly, the same neural circuit was activated during both propulsive and non-propulsive contractions. To perform this study, we took advantage of a recent technical advance from our laboratory (Costa et al., 2019) that enables smooth muscle electrical recordings along the length of colon to be correlated with dynamic changes in colonic wall diameter during propulsion. This allows the patterns of neuronal activity in the ENS that underlie propulsion to be inferred (Spencer et al., 2018). We reveal a mechanism that explains how ENS activity underlies propulsion of content along the colon.

The findings in this study show that coordinated firing of many thousands of ascending and descending interneurons synaptically activate large populations of excitatory and inhibitory motor neurons, not only orally behind the bolus, but also over considerable distances downstream, ahead of the propagating contraction wavefront. This was a significant step forward because it means the temporal delay in onset of smooth muscle contraction ahead of a propagating contraction is due to the preferential aboral projections of inhibitory motor neurons, which, when active, suppress the smooth muscle excitation by the concurrently active excitatory motor neurons (Fig.1). The electrophysiological recordings made concurrently with the spatio-temporal D-mapping showed pulsatile firing of excitatory and inhibitory neuromuscular inputs not only in proximal colon, but also distal colon, long before the propagating contraction invades the distal region (Fig.1). During the propulsion of fluid along the isolated colon, wavelet analysis showed there was increased coherence of excitatory junction potentials occurring at ~2Hz over large distances, between the proximal and distal regions (Fig.1). Therefore, during propulsion, synchronous firing of descending inhibitory nerve pathways over long ranges aborally acts to suppress the smooth muscle from contracting, counteracting the excitatory nerve pathways active over this same region of colon (Spencer, 2021).

As mentioned above, from an evolutionary perspective the ENS is the first brain, as it evolved before the CNS (Furness and Stebbing, 2018, Spencer et al., 2018, Spencer and Hu, 2020). The ENS represents a primeval hard-wired neural control system, which, when active is essential for neurogenic propulsion along the colon. Our work reveals a unique feature of the ENS of the colon that underlies both non-propulsive and propulsive motor patterns. The study demonstrates the existence of large functional assemblies of neurons in the ENS that can self-organise to generate coordinated firing considerable distances along the colon (Fig.2). This activity underlies the basis of an important motor pattern in the colon. The findings uncovered here are far more complex than we expected and considerably different from the mechanisms that underlie the propulsion of fluid along other hollow smooth muscle organs that have evolved without an intrinsic nervous system; like in lymphatic vessels, ureters or the portal vein. Synchronization of neuronal activity across large populations of neurons is common in the nervous system of many vertebrate animals. This study shows that the ENS behaves similar to other complex neural networks in the brain and spinal cord of other species.

Can we predict the menstrual cycle phase from brain connectivity? And, why is this important? 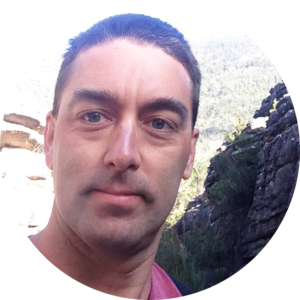 Nick Spencer completed his PhD at Monash University in Australia then moved to The University of Nevada School of Medicine, where he spent 9 years. In 2007, he moved his laboratory to Flinders University in South Australia. His PhD, postdoctoral research and current research is focussed on the Enteric Nervous System (in the gut wall) and how pain pathways from internal organs communicate with the brain. He has developed techniques unique to his laboratory that allow novel insights into how the gut and brain communicate. In collaboration for Dr. Hongzhen Hu at Washington University in St. Louis, he demonstrated the first wireless optogenetic control of the gastrointestinal tract. This means light can be used instead of drugs to control the gut-brain axis.