We performed a GWAS for lung function with adjustment for exhaled nitric oxide (FeNO) levels to account for type 2 airway inflammation. Our study identified the genetic locus most strongly associated with airway obstruction in the Japanese population and new genetic loci associated with FeNO.

The strongest association with FEV1/FVC at both stages was at 6p21.32 with two top variants at the Discovery Stage, an exonic nonsynonymous SNP rs2070600 in AGER and intronic insertion/deletion rs41315238 in RNF5. The regional association plot also suggested that the probable candidate gene at this locus for the association with FEV1/FVC measure is AGER, which codes an advanced glycosylation end product specific receptor (AGER), a member of the immunoglobulin superfamily of cell surface receptors2. On note, a recent larger-scale meta-analysis of the European ancestry GWAS for FEV1/FVC revealed that the P-value of the AGER locus is the lowest one3, suggesting that change of AGER function may affect FEV1/FVC similarly both in the individuals of European ancestry and Japanese.

To explore the functional significance of exonic nonsynonymous SNP rs2070600 in AGER, we examined the variant position in the 3D structure of the AGER complex with S100A6 protein. The SNP rs2070600 in AGER introduces a G82S substitution of AGER in one of its immunoglobulin domains. As the Cα atom of G82 is in close contact with the side chain of L49 within 3.7Å, an enlarged side chain of serine introduced to this position can affect the molecular function of the receptor, which may be responsible for the fact that a G82S substitution of AGER is associated with higher FEV1/FVC. Because our GWAS suggested that the exonic SNP of AGER significantly affected the lung function, we were interested in whether the general population harbours other non-synonymous genetic variants, which may influence the function of AGER. We then next investigated our genomic allele reference panel, 4.7KJPN4 and identified three other rare missense variants of AGER including R244H. The R244 residue is located in the interface to S100A6. The R244 residue of AGER forms a cation-π interaction with F70 of S100A6 and binds to a chloride ion, demonstrating that R244H substitution impairs the interaction between an AGER and a S100A6, because two AGER subunits interact indirectly with each other via the S100A6 dimer. Therefore, this R244H substitution seems to inhibit the dimerization and signalling of the AGER. Based on our study, we propose that the spectrum of AGER variants, from common to rare alleles, contributes to the lung function in the general population. 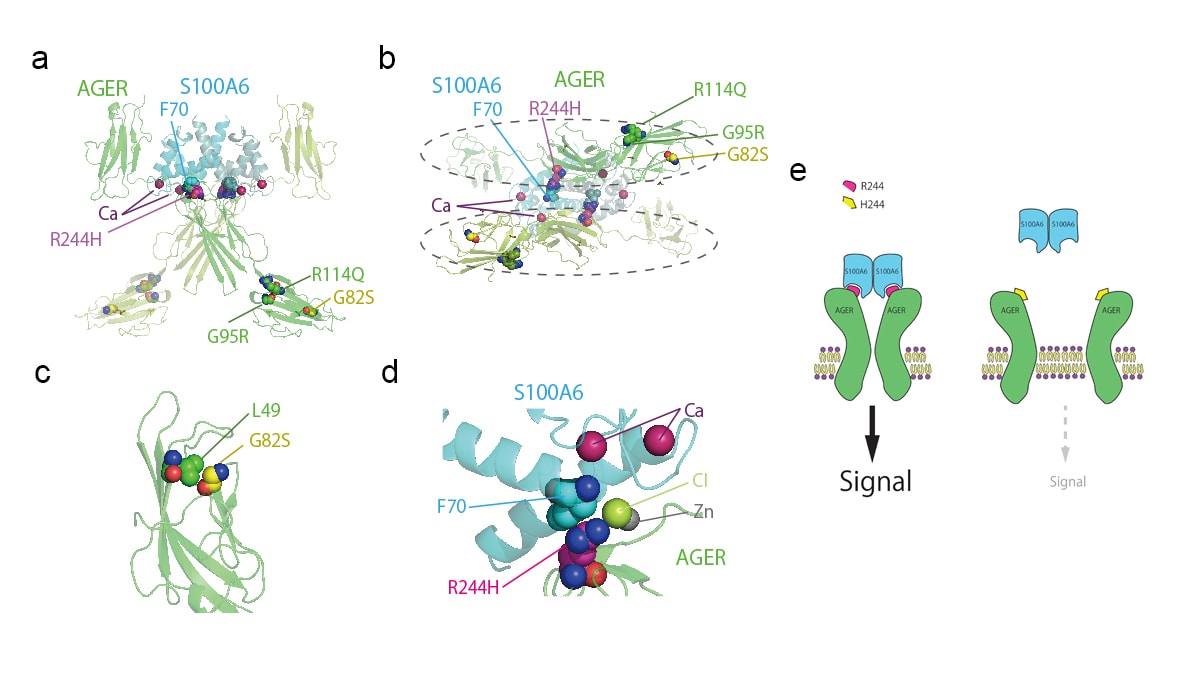 Figure: The presumable effects of missense variants of AGER suggested by the analysis of three-dimensional structure. (a) Side view of the AGER (light and dark green) and S100A6 (light and dark cyan) heterotetramer. (b) The same tetramer as in A, viewed from the axis of symmetry.  The dashed ellipses show two AGER domains, which are not in direct contact with each other. (c) Close up view of the G82 (yellow) and L49 (green) of AGER. (d) Close up view of the AGER R244 (magenta) and S100A6 F70 (cyan) residues. (e) The explanatory scheme of the effect of the R244H substitution on the signalling of AGER. The R244H substitution can impair the interaction between a AGER and a S100A6 because two AGER subunits are in indirect contact with each other via the S100A6 dimer, which results in the inhibition of the dimerization and signalling of the AGER.

We also performed a large-scale GWAS for the levels of FeNO, as FeNO has been proposed as a noninvasive marker of type 2 airway inflammation1. We observed independent regions of significant association at eleven loci at the Discovery Stage. Of the eleven loci, we found two loci, 17q11.2 in NOS2~LYRM9 and 12p13.31 in DSTNP2, had an association P < 5 × 10−8 both at the Discovery Stage and Validation Stage. We also found that 6p22.3 in C6orf62~GMNN had an association P < 5 ×10−5.

The strongest association with FeNO at both stages was at 17q11.2 with the top variant, an intergenic SNP rs2531870 between NOS2 and LYRM9. The regional association plot suggested that the probable candidate gene at this locus is NOS2, which codes inducible NO synthase (iNOS)5. Another tier 1 locus that showed P < 5 × 10−8 association with FeNO at both stages was at 12p13.31 with the sentinel SNP rs11064445 in DSTNP2. Whereas DSTNP2 is a pseudogene that is not likely to effect FeNO, the regional association plot identified a plausible candidate gene in the proximity of this locus that was related to FeNO, SPSB2. SPSB2 encodes a SPRY domain-containing SOCS (suppressor of cytokine signalling) box protein 2 (SPSB2). It has been reported that SPSB2 is a negative regulator that recruits an E3 ubiquitin ligase complex and induces polyubiquitination of iNOS, resulting in proteasomal degradation6. We also found 6p22.3 with the sentinel SNP rs76800089 in C6orf62~GMNN as a tier 2 locus for FeNO. The regional association plot identified that the plausible candidate gene at this locus related to FeNO was RIPOR2. RIPOR2 encodes Rho Family-Interacting Cell Polarization Regulator 2, also referred to as FAM65B. RIPOR2 negatively regulates the migration, adhesion and proliferation of T cells7, which are the cells responsible for allergic inflammation including the induction of iNOS in airway epithelial cells by their cytokines.

Our study has identified the SNP rs2070600 in AGER as the most influential locus associated with FEV1/FVC in the adult population in Japan. The three-dimensional protein structure analysis of AGER revealed that the SNP is likely to affect the molecular function of the receptor. We also identified three genetic loci associated with the FeNO levels. The candidate genes in these loci are NOS2, SPSB2 and RIPOR2, which are all involved in the production of NO. We believe that our findings will contribute to a better understanding of the pathogenesis of respiratory diseases, especially COPD and asthma. We wish to perform further investigations in the laboratory as well as in patients to elucidate the pathogenic role of the genes and their variants identified in this study. 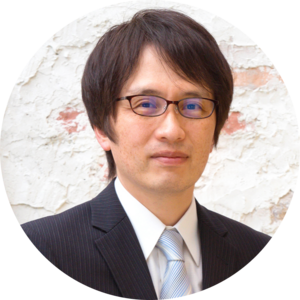