Varicose veins affect one-third of the Western population and have limited treatment options. Potential therapeutic target genes for varicose veins that are both safe and efficacious can be found by analyzing large genetic population samples with comprehensive and longitudinal clinical data.
Pyry Helkkula
Doctoral student, Institute for Molecular Medicine Finland (FIMM)
Follow
Like Liked by Evelina Satkevic and 2 others
0

Varicose veins (VV) is a chronic venous condition that afflicts approximately 30% of the population in Western countries. VV substantially increases the risk of deep vein thrombosis, which in turn increases the odds of chronic complication of post-thrombotic syndrome and acute complication of pulmonary embolism. Treatment options for VV are limited and currently the disease is managed by wearing compression stockings and, more serious cases undergoing venous ablation. In the present study, we conducted a set of genome-wide and phenome-wide genetic analyses to identify genes with an effect on VV risk and with potential for therapeutic  targeting. Of 29 novel VV loci found, the GJD3 gene was implicated as a potentially effective and safe drug target gene, while the TGFB2 lead variant was associated with a higher VV risk. We also discuss the question of sex-specific genetic causes for VV.

Our study method consisted of genome-wide association scans for VV risk with the data of 207,055 Finns from the FinnGen Study in both a sex-combined and sex-stratified manner. Finns are well-suited to identifying variants with a large impact on the development of a given trait, as Finns show an enrichment of protein-coding variants compared to the general European population due to having undergone population bottlenecks and isolation. In addition, the FinnGen study provided phenotypic data on 1,706 disease events curated from  comprehensive and longitudinal healthcare records. We also conducted sex-stratified genome-wide association analyses of VV to boost the likelihood of identifying variant associations, given that VV appears to have female-biased incidence. In addition, we tested if genetics could be a cause for the difference in VV incidence between the sexes. We also analyzed the X-chromosome which has been omitted from previous GWASs of VV.

We identified 50 genetic loci associated with VV of which 29 were novel. Of these two were X-chromosomal and one female-specific near ERG. We established putative links between the VV loci and eQTLs in tissues relevant for VV pathology. Overall, 18 of our observed VV loci were significantly colocalized with eQTLs in arterial, adipose or nerve tissue in the GTEx data. We scrutinized the lead variants in TGFB2 and GJD3 for their potential as drug target genes for two reasons; their large associated effect sizes on VV risk (β=0.77 and β=-0.47 respectively) and their protein-coding nature.

GJD3 may be a potentially effective and safe drug target gene for VV, based on the observed association with VV and pre-existing knowledge of how each relates to hemostasis. GJD3 is expressed in fibroblasts, which play a critical role in hemostasis by first migrating to the trauma and then generating collagen and extracellular matrix to help isolate the blood flow. GJD3 also influences the structure of gap junctions, which affect hemostasis by allowing cells to communicate with one another and thereby coordinate tissue repair. In addition, in the GWAS Catalog, the only other previously reported trait association for GJD3 is platelet distribution width which is another corroborating piece of evidence to the putative role of GJD3 in hemostasis. Thus it is likely that GJD3 function influences hemostasis and consequently the risk of VV. In fact, the Finnish-enriched missense variant in GJD3 was associated with 38% lower odds of VV. The putative mechanistic insight of the function of GJD3 and the association between a protein-inactivating variant in GJD3 and significantly lower risk of VV makes GJD3 a potentially efficacious drug target gene. GJD3 has a promising long-term safety profile for drug targeting based on the results from our phenome-wide scan. We did not observe any phenome-wide significant associations between the GJD3 missense variant and 1,706 disease events besides VV in FinnGen.

Our study also suggests that the TGFβ pathway plays a significant role in the pathology of VV. We identified a 56-fold enriched (compared to non-Finnish non-Estonian Europeans [NFEEs]) synonymous variant in TGFB2 associated with 112% higher odds of VV. We hypothesize that TGFB2 function affects VV risk by affecting thrombosis, which is one the cardinal processes in both hemostasis and VV pathology. Platelets release TGFβ during thrombosis to help synthesize extracellular matrix proteins. Previous studies have also implicated the TGFβ pathway in VV pathology. However, the ubiquity of the TGFβ pathway in cellular growth, differentiation and apoptosis and that TGFB2 has a probability of loss-of-function intolerance (pLI) of 1 suggests that TGFB2 is not a very safe potential drug target.

We tested whether there could be a genetic cause for the apparent, albeit uncertain, female bias in VV incidence. We did not identify strong genetic evidence for the VV prevalence difference between the sexes. The non-significant difference in associated effect sizes of variants genome-widely between the sexes is congruent with that of other complex traits. However, individual variants have been reported to have differing effect sizes between the sexes for complex traits at large, and in this study we observed that the ERG locus was genome-wide significantly associated only in women.

We used the FinnGen study to identify associations between genes and VV. By conducting coed and sex-stratified genome-wide analyses in which the X chromosome was included and with samples from the Finnish population isolate, we identified 29 novel genetic loci for VV. Two of these were X-chromosomal, ten autosomal loci have lead variants with more than a two-fold enrichment in Finns compared to NFEEs, and one female-specific locus near ERG. We point to GJD3 as a potential drug target gene for several reasons. The observed protein-inactivating variant in GJD3 was associated with 38% lower odds of VV and was not phenome-wide significantly associated with clinical events related to any other diseases than VV. Furthermore, GJD3 influences the function of gap junctions and is expressed by fibroblasts which both have essential roles in hemostasis and thus in VV pathology. Needless to say, further studies are needed to elucidate the exact mechanism by which GJD3 has an effect on VV. 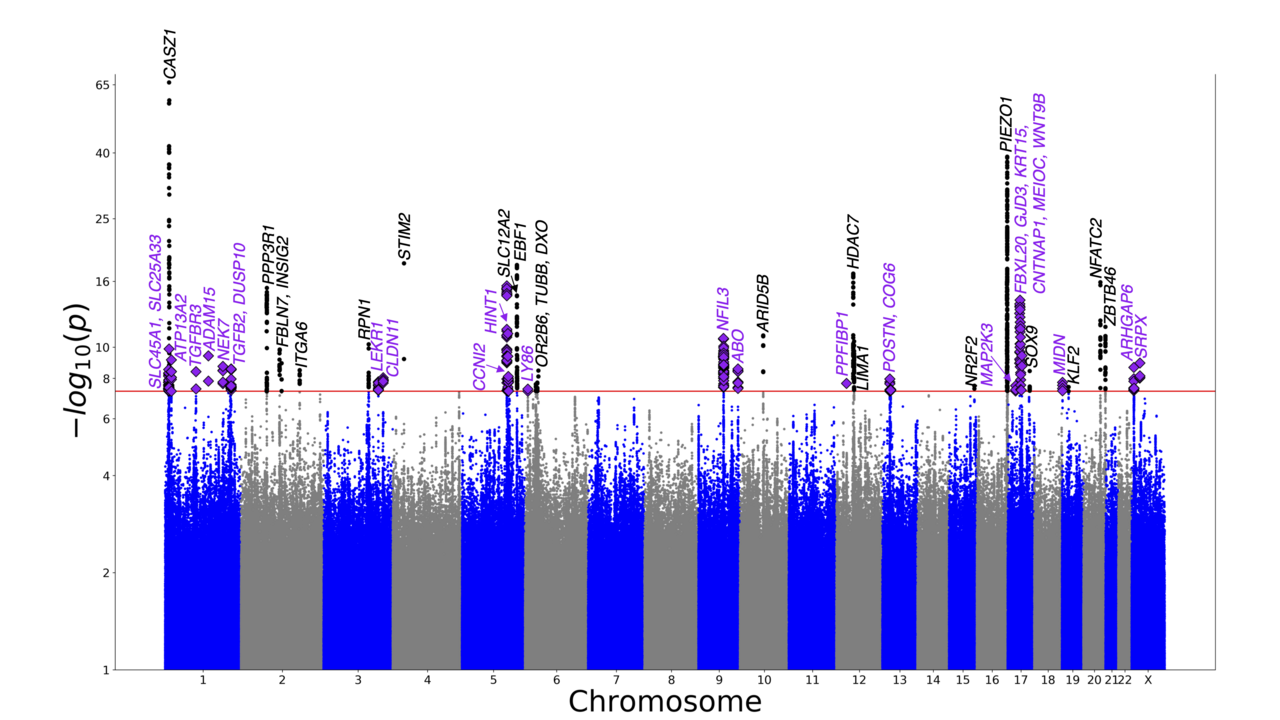 Varicose veins affect one-third of the Western population and have limited treatment options. Potential therapeutic target genes for varicose veins that are both safe and efficacious can be found by analyzing large genetic population samples with comprehensive and longitudinal clinical data.