Written in the first person by Ani Manichaikul, with input from Chaojie Yang, and Ski Chilton
Ani Manichaikul
Associate Professor, University of Virginia
Follow
Like

A little over ten years ago, I started my first collaboration working on genetics of LC-PUFAs, working with the CHARGE Consortium on an early collaborative GWAS of n-3 fatty acid levels that was ultimately published in 2011 (Lemaitre et al. 2011). In the paper, we reported that the rs174547 SNP (which tags a major haplotype in the FADS1/2 region) explained a large fraction of variation in circulating levels of the n-3 fatty acids eicosapentaenoic acid (EPA) and docosapentaenoic acid (DPA). Around the same time, Drs. Ski Chilton and Rasika Mathias were working on genetic studies of LC-PUFAs in African Americans [Mathias et al. 2011]. Their study led to report of the rs174537 SNP (tagging the same haplotype as rs174547 in the FADS1/2 region) as a major contributor in determining LC-PUFA levels in both European and African Ancestry populations.

Learning of the importance of FADS1/2 SNPs and haplotypes in genetics of LC-PUFA levels, Dr. Chilton was intrigued by the strong difference in LC-PUFA levels comparing those with the G/T to G/G genotype, and surmised that T/T homozygotes would be at great risk for n-3 fatty acid deficiency. Scanning the global population-frequencies of the rs174537 T allele frequencies worldwide, he noted the T allele showed higher frequencies in Mexico, Peru, and generally in parts of the world exhibiting greater Amerindian ancestry. In fact, the allele frequencies commonly seen in publicly available browsers turned out to be just the tip of the iceberg, as most individuals representing populations in Mexico and Peru carry at least some admixture from non-Amerindian sources. Additional research done by population geneticist Dr. Tim O’Connor in collaboration with Dr. Chilton showed that Amerindian ancestry is nearly fixed for the haplotype carrying the rs174537 T allele (Harris et al. 2019).

Over time, Dr. Chilton thought more and more about these high frequencies of the rs174537 T alleles and the implication that there could be strong genetic risk for LC-PUFA deficiencies in individuals with the homozygous T/T genotype. Dr. Chilton became very focused on this hypothesis, and eventually moved his academic life to the University of Arizona in order to build stronger relationships with Native American populations there in pursuit of this line of research.

While Dr. Chilton was in the process of moving his lab to Arizona, my group at the University of Virginia had already begun collaboration with Dr. Chilton’s group. While my group does not work with Native American communities, we have active research in genetic studies of Hispanic Americans through our work with the Multi-Ethnic Study of Atherosclerosis (MESA). As we had shown previously (Manichaikul et al. 2012), Hispanic Americans are a heterogeneous group of tri-admixed individuals with European, African and Amerindian ancestry. Among Hispanics, most trace their ancestry to two groups, with some carrying predominantly European and Amerindian ancestry (typical of individuals tracing their origins to Mexico, Central America or South America), and others carrying predominantly European and African Ancestry (typical of individuals tracing their origins to Cuba, the Dominican Republic or Puerto Rico). Thus, the Hispanic American participants from MESA carried valuable information in their genetic ancestry that could be used to investigate Dr. Chilton’s hypothesis of whether individuals homozygous for the rs174537 T allele were at increased risk of n-3 fatty acid deficiencies.

In our paper published this week in Communications Biology (Yang et al. 2021), we demonstrate that, as Dr. Chilton had initially hypothesized, greater proportions of Amerindian ancestry among Hispanic American individuals are indeed predictive of lower LC-PUFA levels. We further show that this relationship with Amerindian ancestry is explained in large part by rs174537 genotypes, as these genotypes show large differences in frequency with respect to Amerindian versus European or African ancestry. Finally, we show that rs174537 is strongly associated with several metabolic, inflammatory and anthropomorphic traits including circulating triglycerides (TGs) and E-selectin in MESA Hispanics. Our findings open opportunities in the near-term for targeted identification of individuals at increased risk of n-3 fatty acid deficiencies, and related precision nutrition efforts in which Hispanic American individuals with greater proportions of Amerindian ancestry might receive nutritional guidance based on this information. In the long run, as genotyping technologies become more accessible and affordable, we would be delighted to see more widespread use of FADS1/2 genotyping as a more precise tool to inform these nutritional recommendations. In the meantime, we emphasize that healthcare providers should keep in mind the great diversity in patient populations, and Hispanic American populations in particular, realizing that this genetic diversity can reflect biologically driven differences in nutritional / metabolic profiles and needs.

Manichaikul, A. et al. Population structure of Hispanics in the United States: the multi-ethnic study of atherosclerosis. PLoS Genet. 8, e1002640 (2012). 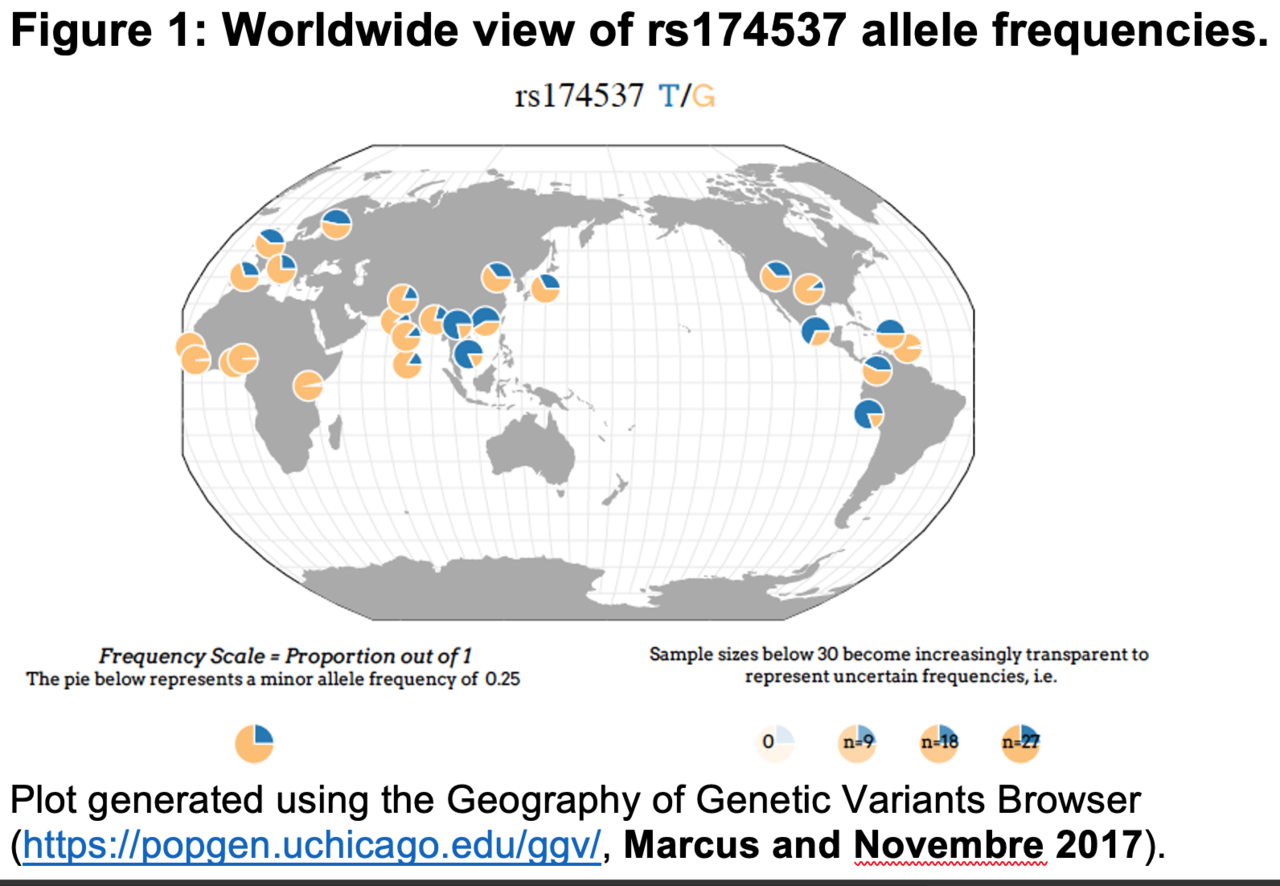 Written in the first person by Ani Manichaikul, with input from Chaojie Yang, and Ski Chilton