Polygenic risk scores (PRS) have been studied for several years for their utility in outcome prediction. Applying PRS to risk stratification in all medical disciplines is still limited.
Jiang Li and Vida Abedi
2 contributors
Like Liked by Evelina Satkevic
0

So far, features selected to predict post-ischemic stroke mortality mainly focus on demographics, social, and limited clinical factors. Identified genetic risk factors have not been integrated into prediction models, individually or together, in either cohort or longitudinal studies. At the same time, the short- or long-term outcomes have become “The Next Big Thing” in the focus of stroke genetics with a great demand for the development of neuroprotective agents1.

Why creating PRS from gene sets:

How to create PRS from gene sets:

Our previous study has identified several pathway-specific PRSs that are significantly associated with ischemic stroke or its subtypes2. Here is an example of the top-ranked pathways associated with small vessel stroke(SVS) and the variants from genes belonging to these pathways (Figure 1). Through our study design and analysis pipeline, we have identified biologically relevant pathway-specific PRS (Li, J. et al. Scientific Reports, 2022), which could, individually or together with other known clinical risk factors, predict post-stroke all-cause mortality. We have provided an alternative way to construct domain knowledge-based PRS and demonstrated its robustness as an independent predictor in the outcome prediction. We have demonstrated the effect size of each pathway-specific PRS in association with post-stroke mortality in subgroups of early-onset or late-onset stroke patients. Some age-dependent associations were identified. We have also demonstrated their pleiotropy by accessing the association of these PRSs with other stroke-related comorbidities. Pathway-specific PRSs indeed have confirmed or prioritized some known etiologies for the outcome of interest, but also identified some novel pathways in the observed disease population. The PRS findings derived from pathway enrichment analysis may promote drug target identification as well as precision medicine for patients predisposed to a specific higher genetic risk score.

In conclusion, we provide evidence that pathway-specific PRSs for ischemic stroke are associated with 3-year all-cause mortality. The integrated multivariate risk model provides a better prognostic value for overall survival after ischemic stroke. Identified PRSs from disease-relevant pathways echoed several known etiologies for IS as well as post-ischemic stroke mortality. 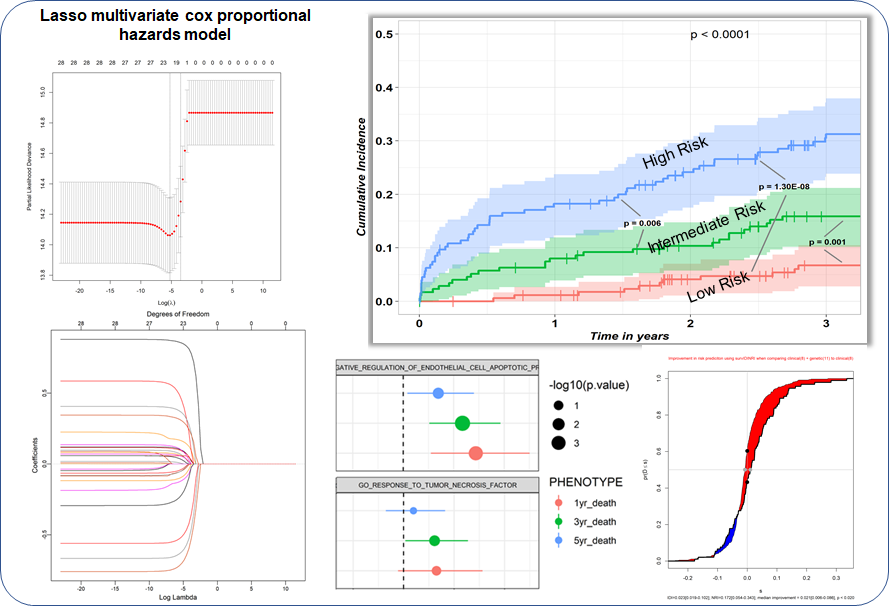 Polygenic risk scores (PRS) have been studied for several years for their utility in outcome prediction. Applying PRS to risk stratification in all medical disciplines is still limited.