Early life adversity exposure has a prolonged effect on development

Stress has the power to impact our bodies physically and emotionally. Both acute and chronic stress impair the function of inflammatory1, cardiovascular2, gastrointestinal3 and brain systems involved in hunger, emotion regulation and cognitive processes4. When stress happens during sensitive periods of development, it can have an important and persistent effect on the function of these systems5. For example, studies have demonstrated that early life stress is highly associated with susceptibility to eating disorders and metabolic diseases throughout the life course6. However, the biological mechanisms that explain the association between early life stress and eating disorders is still poorly understood. An important hormone that seems to be involved on the long-term effects of early life stress is leptin7. Studies in animal models indicate that early life stress induces reductions in plasma leptin and leptin expression in white adipose tissue8.

The role of leptin on eating behavior

Leptin is an adipose-tissue-derived hormone involved in physiological processes that include appetite, body weight regulation and emotional behavior9. Although being produced in the periphery, leptin acts on its receptors that are spread throughout the brain to influence these behaviors. Therefore, understanding the function of the leptin receptor and associated molecules in the brain can shed light on the mechanisms by which leptin operates to moderate the effects of early adversity on eating behavior and emotional regulation. Studies in non-human models have clarified these functions of leptin in modulating mood10 and eating behavior11 when acting in specific brain regions12. However, these effects are difficult to study in humans. Our lab has created a novel method to quantify individual variation in the expression of gene networks in specific tissues based only on the genotype information of the subjects 13-15. This allows the investigation of the effects of the leptin receptor gene network in specific brain regions, as well as its interplay with early adversity, on eating behavior in large samples of children, which was described in our recently published study in Communications Biology16.

We start from the assumption that the biological mechanism responsible for the association between brain leptin function and eating behavior comprises a gene network, and not a single gene. For example, a gene co-expression network is a set of genes that are co-expressed within a specific tissue or brain region and interact with each other to influence a biological process. In this study, we focused on the gene co-expression network of the leptin receptor gene in the prefrontal cortex and hypothalamus. To characterize the network, we identified all the genes co-expressed with the leptin receptor in these two brain regions independently, using genome-wide RNA-sequencing data from nonhuman models. Subsequently, using databases of human post-mortem tissue, it is possible to further characterize the gene network in humans as well as filter the gene selection for those more expressed during a certain developmental period (in this case, childhood).

All the genetic variants (single nucleotide polymorphisms or SNPs) from the gene network genes are mapped and clumped to eliminate those in linkage disequilibrium. Then, using the genotype information from the target children sample, we multiply the number of effect alleles in each SNP by the effect size of the association between alleles and gene expression given by a database called GTEx, GTEx contains information from multiple human tissues pairing genotype and gene expression data.

After summing across all the selected SNPs, each child in the sample will have an expression-based polygenic score (ePRS). Variations in the ePRS represent individual variation in the expression of the leptin receptor gene network in that specific tissue (e.g. prefrontal cortex or hypothalamus).

Fig. 1: Schematic presentation of the steps involved in the creation of the expression-based polygenic risk score based on genes co-expressed with the leptin receptor (LepR) in the prefrontal cortex (PFC). The GeneNetwork database was used to generate a list of genes co-expressed with LepR in the PFC in mice. Mice genes were then converted to human homologous genes. Since we were interested in gene networks that were active during early developmental periods, we retained only the genes overexpressed in early life in comparison to adulthood using the BrainSpan database. Then, we gathered all the existent genetic variants (SNPs) from these genes and identified those existent in our human cohorts and in the GTEx human PFC database. The final SNP list was subjected to clumping to eliminate highly correlated SNPs (linkage disequilibrium clumping). The genotype of the cohort’s participants was then weighted at each SNP by the SNP-gene expression association slope derived from the GTEx database. The summation of these values from the total number of SNPs provides the PFC ePRS-LepR score.16

We observed that the prefrontal cortex-based Leptin receptor ePRS moderated the effect of early adversity on several domains of the Child Eating Behavior Questionnaire. In other words, postnatal adversity was associated with a less adaptive eating behavior specifically in children with low ePRS score. We observed these effects in children of different ages and diverse ancestries from two independent birth cohorts. We did not observe effects of the prefrontal cortex-based Leptin receptor ePRS on the peripheral fasting glucose and leptin, suggesting that these associations do not operate via peripheral signaling and the reported effects on eating behavior are likely due to specific effects of the leptin receptor gene network in the prefrontal cortex.

The leptin receptor gene co-expression network is a highly connected network, involved in nervous system development, response to lipids and nutrient levels, and anatomical structure, which suggests that these processes may be involved in the association between early life adversity and eating disorders. Because eating behavior was analyzed in childhood, the results substantially advance our attention to children who are vulnerable to emotional eating disorders before the onset of metabolic diseases. Our results guide the understanding of individual differences in eating patterns associated with risk for obesity in response to fluctuations in stress exposure early in life. 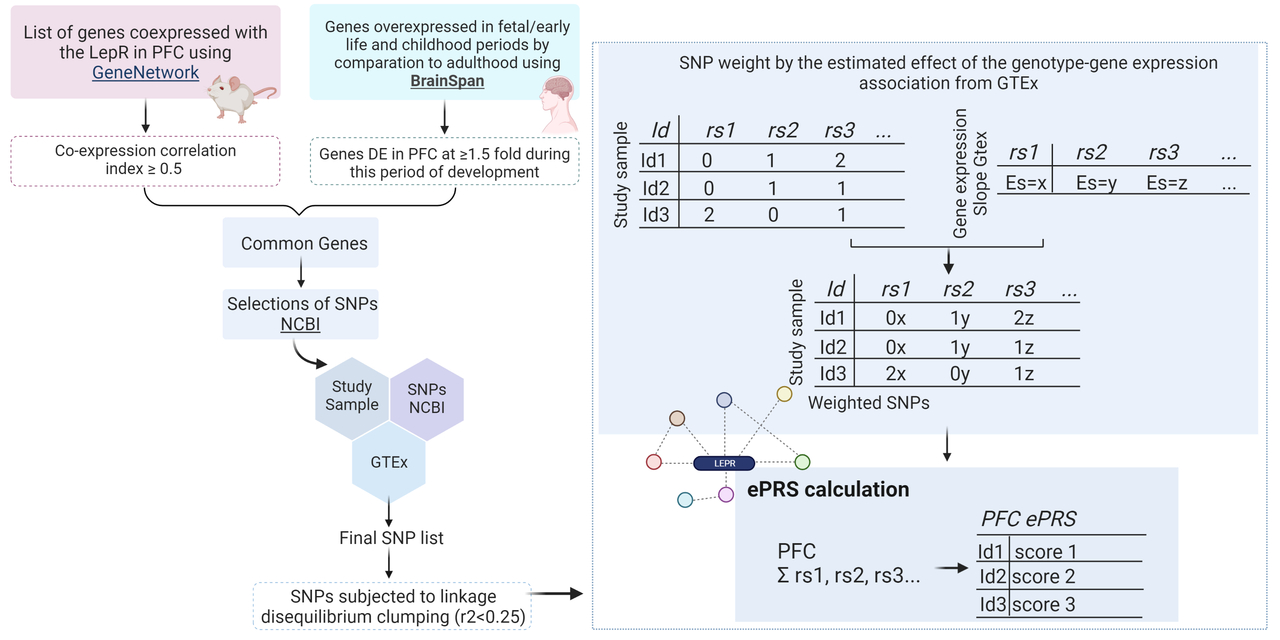