This study presents a detailed analysis of the genomic diversity of SARS-CoV-2 viruses that have caused COVID-19 morbidity and mortality in Ghana.
Collins M. Morang'a, Peter Kojo Quashie, Gordon A. Awandare & Lucas Amenga-Etego
4 contributors
Like Liked by Evelina Satkevic
0

In this genomic epidemiology study from Ghana, the authors sequence ~1,000 SARS-CoV-2 whole genomes from March 2020 to September 2021. They describe changes in the predominant circulating lineages over time and infer how variants of concern were likely introduced into the country.

The work represents the most advanced genomic analysis of SARS-CoV-2 in sub-Saharan Africa and demonstrates the progress made in science capacity building in the region. The study also shows the power of local collaborations as the work was done by an extensive network of public health institutions across Ghana. Despite the efforts to control the introduction and spread of SARS-CoV-2 in Ghana, there has been continuous seeding of new variants that have been responsible for COVID-19 waves across the country. From the start of the pandemic until the end of September 2021, there were approximately 127, 482 reported cases, and 1156 case fatalities 1. During the time, Ghana experienced three distinct COVID-19 waves, which were characterized by a surge in clinical cases and case-fatalities. Compounded with low vaccination levels, adherence to preventive and control measures within various communities was low to average resulting in persistent asymptomatic infections in major cities in Ghana 2. Thus, the COVID-19 pandemic has been the fastest evolving pandemic in recent Ghanaian history as well as globally. Against the backdrop of having established local sequencing capacity to track the viral evolution 3,  there was a need to continue monitoring the importation of new variants and how they are spreading and dominating in various regions across the country.

To effectively evaluate the spread of imported variants we needed to sequence samples from several regions across the country. And to explore the dominance of these variants, we sequenced samples across several months; from March 2020 to September 2021. A total of 1123 genomes were analyzed, and this included 121 travellers and 1002 community samples. Thus, data presented in the article was entirely before the emergence of Omicron. At the end of the study, we saw different variants being responsible for different waves. The first wave was largely dominated by the  B.1.1 lineage, the second wave was dominated by the Alpha, Eta and  B.1.1.318 variants and finally, the third wave was largely dominated by Delta variants. During each wave, we saw that detection of variants in travellers preceded detection in community samples.

The prevention and control measures for COVID-19 in Ghana have evolved with the global trends in the pandemic.  Initially (in March 2020), the government closed all airports and land borders to international travellers and a partial lockdown of major cities. Later in September 2020, the government reopened the airport with several containment measures which included a negative PCR test before departure, and travellers had to be antigen-negative on arrival. With this level of control, we still saw the importation of different lineages including variants of concern (Alpha, Beta, Eta, and Kappa) in January and March 2021, and later detection of Delta in June 2021.  Travellers from neighbouring countries such as Nigeria, Burkina Faso and Ivory Coast had some of these variants, although they had not been reported in these countries at the time of detection.

Unsurprisingly, Ghana lagged slightly behind the overall African and Global pandemic waves, suggesting that most of the variants of concern did not spontaneously arise locally. The marked shifts in circulating and dominating variants after the emergence of new variants in other parts of the world typifies this phenomenon of importations. Besides, our data suggest that the delayed peak in waves was at least partly due to the mandatory antigen testing on arrival and subsequent imposition of a policy for compulsory isolation of all antigen-positive travellers. The B.1.1 lineage was first detected in March 2020 and peaked in July 2020, remaining dominant until December 2020. The Alpha variant quickly supplanted the B.1.1 lineage and suddenly became the most dominant lineage from January-March 2021, and this coincided with the second COVID-19 wave across the world. Unexpectedly, a variant that was “under monitoring” in countries such as Mauritius had been detected in travellers from Gabon and Nigeria, and suddenly dominated infections from April-June 2021. After the detection of the Delta variant in travellers, it quickly spread across the country becoming the most dominant lineage in July 2021 and remaining so until September 2021 across several regions in Ghana. The Delta lineage was the most dominant variant (32 %, 360/1123) in all our samples.

We then wondered, despite the dominance, whether there was a significant change in the genetic diversity of these variants; and what this could  imply? Firstly, we determined the mutational frequency of the variants, and we observed that Alpha, B.1.1.318, B.1.1.359, B.1.1, and Eta were the most evolved genomes (~30 mutations) compared to most of the lineages in 2020. These observations meant that this local evolution could have enabled variants such as B.1.1.318 to adapt to the Ghanaian population and dominate, although it was not prominent in other countries. Unsurprisingly, mutational fitness of all the B.1.1.318 genomes, showed that some spike protein mutations were likely conferring fitness to the variant. Secondly, phylogenetic analysis showed that all the variants had an evolutionary relationship through space and time during the entire COVID-19 pandemic in Ghana. These phylogenetic relationships have been observed in other countries. Besides most of these genomes shared the spike D614G (~97 %) and ORF1b: P314L (~91 %). There was a high level of sharing and a few unique mutations between the variants, and the latter plays a significant role in defining the variant and its impact on the pandemic. For example, a combination of a few unique spike substitutions such as T95I, E484K, D614G, P681H, and D796H may have allowed B.1.1.318 to escape Alpha-induced immunity in the Ghanaian population and become dominant, replacing the Alpha variant.

In summary,these findings suggest that SARS-CoV-2 is continuously evolving, giving rise to new variants that are dominant or may dominate future infections. However, our observations may have been limited by the underrepresentation of variants in other regions, purposive sampling, and lack of sufficient clinical/epidemiological data, such as co-morbidities. But since we used a large sample size and conducted a robust genetic diversity analysis, we have high confidence that the data provide a credible overview of the dynamics of variants of concern during the pandemic waves in Ghana.  There is a need for continued scale-up of vaccinations, as well as monitoring the evolution of the virus to provide relevant data that can drive policy decisions on prevention and control of the COVID-19 pandemic. 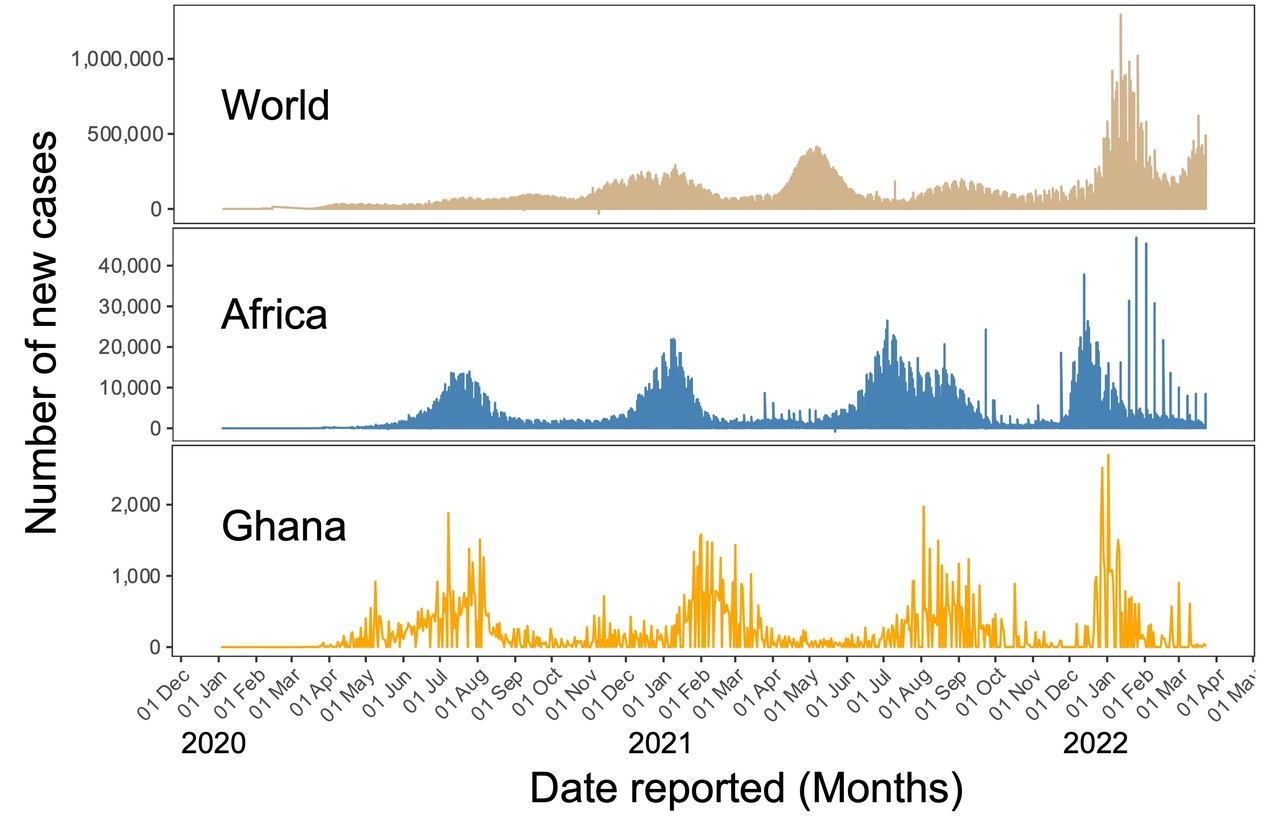 This study presents a detailed analysis of the genomic diversity of SARS-CoV-2 viruses that have caused COVID-19 morbidity and mortality in Ghana.