The postsynaptic density (PSD) is a protein condensate located in dendritic spines that hosts scaffold proteins and signaling transducers to enable receptor clustering and integration of presynaptic inputs. Despite decades of research, the molecular basis of how the PSD is assembled remains mysterious. For instance, a long-standing question is how the integrity of the PSD protein condensate is sustained yet retains sufficient plasticity essential to neuronal activation. Recently, in vitro reconstitution assays elegantly revealed that PSD proteins—including PSD-95, SYNGAP1 and SHANK3—undergo liquid-liquid phase separation (LLPS) to form protein condensates. LLPS is a biophysical phenomenon by which proteins can form droplets in solution or in cytosol, rather than being randomly distributed, and it has been observed in diverse biological processes, such as chromatin remodeling and RNA-protein interactions. However, despite numerous in vitro studies, few studies have experimentally demonstrated LLPS at synapses.

A key feature of LLPS is the diverse interactions among multivalent binding proteins and intrinsically disordered proteins (IDP). We have been working on a postsynaptic scaffold protein, Cortactin-binding protein 2 (CTTNBP2), that regulates the development of dendrites and dendritic spines via protein-protein interactions. CTTNBP2 acts as a master modulator for targeting many PSD proteins to synapses, including SHANKs and NMDA receptors. Interestingly, >60% of the CTTNBP2 protein is intrinsically disordered, which is critical for LLPS. Therefore, we were prompted to test the possibility that CTTNBP2 undergoes LLPS in neurons, especially in dendritic spines.

To explore that possibility, we adopted both imaging and biochemical approaches in the present study. We observed that GFP-CTTNBP2 undergoes fusion and fission in cells and that it spontaneously forms droplets in vitro. We found that 1,6-hexanediol (1,6-HD), aliphatic alcohol that disrupts weak hydrophobic protein-protein interactions and dissolves the protein droplets formed by IDPs, disrupted endogenous CTTNBP2 protein condensates in dendritic spines. This observation further evidences that CTTNBP2 undergoes LLPS in neurons.

Previously, we reported that CTTNBP2 regulates zinc levels and the synaptic distribution of many zinc-binding or regulated proteins (such as SHANK3 and NMDA receptors), in the brain. Therefore, we investigated if CTTNBP2 directly binds zinc ions and controls zinc-related signaling at dendritic spines. Using purified recombinant proteins in the present study, we confirmed the direct binding of CTTNBP2 to zinc ions. Interestingly, when we increased the zinc concentration in solution, CTTNBP2 began to form solid protein aggregates in solution. Therefore, we speculated that zinc ions directly alter the phase transition of CTTNBP2. Advanced FRAP imaging of purified proteins further revealed that zinc reduces CTTNBP2 protein mobility within the protein condensates.

CTTNBP2 is classified as a high-risk gene linked to autism spectrum disorder (ASD). We explored if ASD-linked CTTNBP2 mutations impact LLPS and indeed uncovered that various such mutations compromise the LLPS capability of CTTNBP2. Critically, one ASD-linked mutation, M120I, significantly enhanced molecular mobility within protein condensates, as revealed by FRAP imaging. In contrast, increasing zinc levels in solution reversed the impact of the M120I mutation on CTTNBP2 phase transition. Importantly, rather than using truncated proteins, in our study we have used ASD-linked mutations to demonstrate how LLPS is regulated in neurons, enabling us to preserve most native protein-protein interactions of CTTNBP2 in neurons and thereby supporting the specificity of our manipulations and providing greater insight into ASD etiology.

We have previously reported the beneficial effect of dietary zinc supplementation on CTTNBP2 mutant models. However, it had remained puzzling how zinc controls the distribution of such a diversity of proteins at synapses. Our present study provides further evidence that, through CTTNBP2, zinc modulates protein phase transitions at synapses, eliciting changes at the molecular and behavioral levels.

We have been profoundly grateful to collaborate with the excellent structural biologist Dr. Kuo-Chiang Hsia and his PhD student Sahana Shankar at the Institute of Molecular Biology, Academia Sinica, in this project. We have been working on CTTNBP2 for many years, but a significant impediment to our studies had been the lack of purified full-length CTTNBP2, perhaps due to its inherently disordered nature. Dr. Hsia successfully expressed and purified full-length GFP-CTTNBP2, allowing us to overcome that limitation and tackle a number of unanswered questions.

The present report represents an encouraging milestone in our investigations of CTTNBP2, yet much work remains to be done. Uncovering that CTTNBP2 undergoes LLPS has opened up a host of new research avenues to us. Although we have successfully used cultured neurons to demonstrate LLPS of various PSD proteins, the dynamics of the entire PSD during different stimulations remains unclear. Visualizing PSD protein redistributions in vivo has been achievable for years, but it remains challenging to specifically attribute the phenomenon to protein phase transition. In our present report, we have demonstrated that zinc input from presynaptic vesicles significantly modifies the protein phase of endogenous CTTNBP2. The activity-dependent feature of zinc regulation implies a link between LLPS and neuronal plasticity. However, we await solid evidence that LLPS is essential for neuronal plasticity and that this phenomenon has a significant impact on neuronal circuits and behaviors. Further detailed investigations will be necessary and, even more importantly, additional interdisciplinary techniques will need to be applied to address these fascinating and fundamental biological questions.

All the works are done in Institute of Molecular Biology, Academia Sinica, Taiwan. 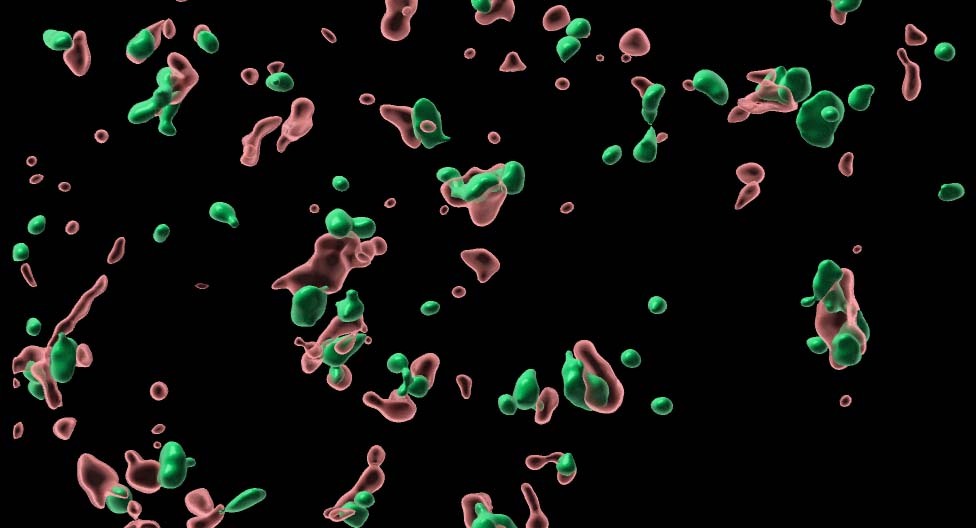