Can we predict the menstrual cycle phase from brain connectivity? And, why is this important?

Various studies in animals demonstrate neuroactive effects of ovarian hormones. However, the implications for the human female brain along the menstrual cycle are not yet fully characterized. Here, we propose that the communication among three major brain networks is particularly sensitive to the fluctuation of ovarian hormones along the menstrual cycle. By E. Hidalgo-Lopez & B. Pletzer.

The purpose of the female reproductive cycle, in humans: menstrual cycle, is to trigger ovulation by complex neuroendocrine feedback loops. Accordingly, the ovarian hormones, estradiol and progesterone, fluctuate along the menstrual cycle. However, besides their key role in reproduction, these hormones have far-reaching neuroactive effects1. Currently, the influence of ovarian hormones on brain development and organization is broadly evidenced by animal research, ranging from local stimulation of new brain cells (neurogenesis) to the modulation of large-scale brain networks. As a result, even fluctuations in cognitive processes have been observed2,3. Paradoxically, what should be a compelling reason to explore the hormone-related neural changes in humans, is used as deterrence against it, and women’s brains remain under-investigated4. As a result, we are now facing a serious sex bias in neuroscientific research. Longitudinal designs along the menstrual cycle are more challenging to handle, but also necessary to understand the role of ovarian hormones as modulators of brain function. Indeed, this natural within-subject setup offers the perfect scenario to study three characteristic hormonal profiles in women: low hormonal levels during the early follicular phase at the beginning of the cycle, an estradiol peak while progesterone remains low right before ovulation in the middle of the cycle, and higher levels of both hormones during the mid-luteal phase about a week after ovulation (Fig.1).

But, are the changes these hormones cause in the female brain so strong, that this warrants the distinction of women during different hormonal states in neuroscientific research? While current data suggest only subtle changes in the size and activity of specific brain areas, the vote is still out on changes in brain connectivity, i.e. the extent to which different brain areas communicate with each other. Are changes in brain connectivity strong enough, that we could use them to classify an early follicular, pre-ovulatory or mid-luteal brain?

Over the past decades, the development of more sophisticated neuroimaging analyses has greatly contributed to our understanding of the living human brain. Via functional magnetic resonance imaging (fMRI) we can non-invasively outline brain connectivity at rest. Amongst the most common approaches to resting-state fMRI is the assessment of large-scale sets of brain areas with temporally correlated activity. Three of these brain networks have been identified as the ‘core’ networks, supporting essential cognitive functions. The default mode network (DMN) is mainly active at rest and responsible for self-referential processing. The salience network (SN) maps which stimuli are most relevant. The executive control network (ECN) balances the active processing and maintenance of relevant information with the inhibition of irrelevant stimuli in order to achieve goal-directed actions. The interplay between these three networks has been proposed as a common framework to understand multiple psychiatric and neurological disorders (triple-network model)5.

Identifying these networks’ coupling dynamics on healthy naturally cycling women could help us to further understand clinically relevant disorders in which neuroendocrine factors are involved. Menstrual cycle-related disorders such as premenstrual syndrome (PMS) and premenstrual dysphoric disorder (PMDD), but also other neuropsychiatric disorders involving neuroendocrine modulation have been suggested to present an impaired organization of the triple model network6–9.

In our paper “Spectral dynamic causal modelling in healthy women reveals brain connectivity changes along the menstrual cycle” published in Communications Biology https://rdcu.be/ct03P, we applied state-of-the-art connectivity analyses within a triple network model to a large longitudinal resting state-fMRI dataset. This way, we investigated for the first time the causal influence within and between the core networks in 58 healthy young women during early follicular, pre-ovulatory and mid-luteal phase. We selected 11 brain areas representing the three neurocognitive networks and assessed the influence that each of them exerted over the others (effective connectivity) by computing spectral dynamic causal models (DCMs) within a Parametric Empirical Bayes (PEB) framework10.

Regarding the connectivity of the DMN, we observed an endocrine modulation of the engagement between the anterior and posterior nodes. Global integration was highest during the early follicular phase (Fig. 2 a).

Regarding the connectivity from the SN, we observed a shift in lateralization from right to left during the pre-ovulatory phase in response to heightened estradiol levels. Hemispheric asymmetry within the SN was lowest during the mid-luteal phase, as the inter-hemispheric connectivity between bilateral insulae increased in response to heightened progesterone levels (Fig. 2 b).

Regarding the connectivity from the ECN, we also observed a decreased asymmetry during the mid-luteal phase (Fig. 2 c). This phenomenon has already been suggested to reflect a reduced transcallosal inhibition related to increased levels of progesterone11.

Combining the changes among the three networks, two observations are of interest.

First, there was an increased recruitment of executive frontal areas by the insular cortex (part of the SN) during the high hormone phases. This result corroborates the role of the insula in integrating external and internal stimuli. Accordingly, the insula arose as the driving hub within the triple-network model, switching between the default and executive control networks in response to hormonal fluctuations12(Fig. 3).

Second, the right frontal areas decoupled from the precuneus (part of the posterior DMN) during the pre-ovulatory phase. As a result, the precuneus engaged the other posterior nodes during the high hormone phases (Fig. 4). The precuneus is among the most connected brain areas and has already been identified as the most flexible node around the ovulatory window13.

Finally, we assessed if the most confident changes (as depicted in Fig. 5) could be used to classify an early follicular, pre-ovulatory or mid-luteal brain. In line with previous structural results14, and despite the small effect size, we found an above-chance prediction of the women’s cycle phase.

Future studies combining structural and functional changes together and considering any relevant inter-individual variables may offer more accurate classifications. Most importantly, these significant results corroborate the remarkable plasticity of the female brain in response to the rapid changes of ovarian hormone levels across the menstrual cycle. This is particularly noteworthy considering that the hormonal fluctuations along the menstrual cycle are comparatively subtle as opposed to more pronounced hormonal changes during pregnancy, adolescence or menopause. Our results on healthy naturally cycling women may have further implications for those menstrual cycle-related disorders where this pattern of brain coupling dynamics has been suggested to be impaired, such as PMS, PMDD or dysmenorrhoea15. This highlights the importance of studying physiological ovarian hormone modulations, especially when women’s health and well-being are in question.

To read more about this work, check out the link below!

Data and scripts are openly available at OSF, https://osf.io/23d7x/ 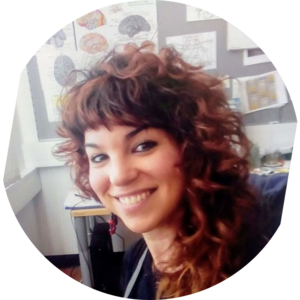