A modular super-enhancer in retinal development

Super-enhancers are believed to define cell identity and cell fate across development. Our lab has identified distinct modules within the Vsx2 super-enhancer that are necessary for the development of retinal progenitor cells and bipolar cells in murine retina.

Many central nervous system-specific transcription factors (TFs) display a complicated expression pattern because they are expressed in multiple cell types across multiple stages of development. Traditional gene knockout approaches do not allow for precise uncoupling of TF function in early and late-stages of development, and potential cell-type specific effects, due to profound early phenotypes such as an underdeveloped CNS or embryonic lethality. To understand the function of TFs across CNS development, our laboratory has identified and examined super-enhancers (SEs) that regulate TF gene expression in murine retina.

The retina as a model for neurodevelopment

The retina serves as a robust model for studying neurodevelopment for several reasons. First, it is a remarkably accessible part of the CNS as opposed to the brain or the spinal cord, making electroporations and dissections a simple and quick process. Second, it is evolutionarily conserved and so the experiments that we perform in mice better inform our understanding of the disease in humans. Third, all of the cell types as well as their structure and function have already been well elucidated. We know that there are seven cell types, and that they exist in three distinct layers. Thus, aberrations in cell type distribution or morphology as a result of experimentation are easily identifiable.

What is a super enhancer?

Super-enhancers (SEs), a subset of enhancers, are expansive regulatory elements containing clusters of transcriptional enhancers believed to define cell identity and cell fate across development1-4. Advances in high-throughput sequencing assays such as chromatin immunoprecipitation sequencing (ChIP-seq) has allowed for tens of thousands of putative enhancers to be identified in the developing murine and human CNS5-7. However, very few of these enhancers have been functionally tested in vitro or in vivo. In the present study, we functionally test a SE in vivo and find that the Vsx2 SE contains distinct regions that are necessary for the development of retinal progenitor cells and bipolar cells. We have since implicated SEs as modular gene regulatory paradigms that may be used to uncouple the complex expression patterns of neurogenic TFs.

The Vsx2 super-enhancer acts in a modular fashion

Microphthalmia, a developmental disorder in which children are born with an extremely small eye and are blind, can be caused by a mutation in a single gene, VSX28,9. VSX2 encodes a transcription factor that is expressed in all retinal progenitor cells (RPCs) as well as differentiated bipolar cells and Müller glia10-12. Mice with microphtalmia were found to have a spontaneous mutation in Vsx2 and had a dramatic reduction of RPC proliferation8,10,13. Since retinal development is perturbed at an early stage in this model, the precise role of Vsx2 during later stages of retinal development was unknown.

Our laboratory previously identified a 32 kb super-enhancer upstream of Vsx2 using integrated epigenetic profiling5. Within this SE is a consensus binding site for Vsx2, with ChIP sequencing confirming that Vsx2 does bind its own SE in adult murine retina14. Under the premise that Vsx2 binds to its adjacent SE to regulate Vsx2 expression, the SE is defined as a core regulatory circuit SE (CRC-SE). In the present study, we dissect the Vsx2 CRC-SE to understand the role of individual regions within the CRC-SE during retinal development.

Genomic conservation across vertebrate species can be indicative of important transcription factor binding sites and enhancers that regulate gene expression. We identified evolutionarily conserved regions within the Vsx2 CRC-SE and examined their chromatin accessibility across retinal development using scATAC-seq. One region, called R0-37, exhibits open chromatin in RPCs during early development while another region, R3-17, exhibits open chromatin in bipolar cells during late development. Next, we individually deleted these candidates in mice using CRISPR/Cas9 gene editing technology. Strikingly, the deletion of R0-37 disrupts RPC proliferation and recapitulates microphthalmia that was originally observed in the Vsx2 gene mutation mouse. The deletion of R3-17 leads to a complete loss of bipolar cells, but RPC proliferation is unaffected. By identifying the developmental stage and cell-type specific CRC-SE regions, we have uncoupled the expression pattern of Vsx2 during early and late stages of retinogenesis. This prototypical SE may serve as a model for dissecting the complex gene expression patterns for TFs in any tissue type across development. 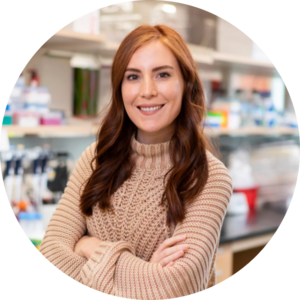