A machine-learning based objective measure for ALS disease severity

Amyotrophic lateral sclerosis (ALS) is a fatal neurodegenerative disease. People with ALS progressively lose their ability to use their voluntary muscles – eventually becoming paralyzed so they cannot walk, talk, eat, and breathe. The average lifespan after diagnosis is three to five years.

This devastating condition presents obvious challenges to the patient and their caretakers. Because of the disease’s complexity and diversity, it has also has proven to be very challenging to discover and develop effective treatments to slow, stop, or reverse ALS. The few drugs that are currently available for treating the disease demonstrate little clinical benefit. For both patients and doctors seeking to assess the effectiveness of existing drugs and those working to discover and develop newer, more effective treatments, measuring disease state and changes in progression has proven to be very difficult.

This is, at least in part, because ALS is a very heterogenous condition. There is much evidence to suggest that ALS has multiple etiologies. Additionally, ALS doesn’t always clinically manifest in the same ways. For some people, symptoms begin as slurred speech. For others, they first appear as foot drop or trouble with handwriting. As the disease progresses from onset through the later stages, different abilities can be affected, and the rate of progression can vary greatly. Currently, disease symptoms and progression are measured primarily through subjective ordinal assessments of of gross and fine motor function, bulbar function, and respiratory function like the revised ALS Functional Rating Scale (ALSFRS-r).

In 2014, we at the ALS Therapy Development Institute (ALS TDI) initiated a first-in-kind translational research program, the ALS Precision Medicine Program (PMP). Today, the program has enrolled more than 800 people with ALS, who provide data such as ALSFRS-r scores, voice recordings, natural histories, and movement data gathered by accelerometers in addition to DNA, RNA, and cellular samples.

The development of new biomarkers would help medical teams and patients to make informed decisions about patient care. It would also help to improve clinical trials – making them more efficient and potentially decreasing their durations so that more treatments could be assessed in less time. Smaller trials would mean more treatments tested. And faster answers would mean faster access for people living with ALS.

At the outset of the PMP, we implemented digital outcome measures – we included accelerometry to track a person’s abilities to move their arms and legs, and digital voice recordings to track the development of impaired speech, or dysarthria. We did not yet know how these data might be utilized, but recognized that we should not squander the opportunity to collect it. People with ALS were generously contributing time and effort to this program, and so we wanted to collect as much information as we possibly could.

By 2018, we had collected thousands of voice recordings and accelerometer datasets. Our internal scientists worked to extract meaningful information and made some small strides, but our expertise and computational horsepower were limited. Fortunately, we had been in communication with the research team at Google AI, led by machine learning experts Dr. Michael Brenner and Subhashini Venugopalan. The Google team developed a machine learning (ML) based algorithm that can provide an objective measure for ALS disease severity, based on voice samples and accelerometer measurements from a four-year longitudinal dataset.

Data from 584 people living with ALS were included in this project with 542 people contributing 5814 voice recordings and 350 people contributing 13,009 accelerometer data samples. These data were collected along with patient self-assessed ALSFRS-r surveys. Using these data, Brenner and Subhashini were able to train ML models to predict bulbar-related and limb-related ALSFRS-R scores. This essentially means that a person with ALS can record a phrase, and a ML model will be able to output a numerical value indicating their degree of dysarthria that relates directly to ALSFRS-r scores. Similarly, a person with ALS can submit accelerometer data and a separate ML model will be able to output a number value indicating their ALSFRS-r gross and fine motor function scores.

We feel that this type of innovation can take the guesswork out of assessing ALS-related functions and grading decline or improvement. For a disease like ALS, where it has been challenging to measure the effectiveness of treatments because of subjective and insensitive ordinal outcome measures, these types of tools might profoundly impact the pace of clinical drug development and help with individual patient clinical care.

We have made these ML models publicly available to any researchers, clinicians, or people with ALS who would like to try them. We are under no illusions that these tools are a finished product. We believe that better protocols can be developed, with which better ML models might be trained to assess ALS symptom severity and disease progression. However, we hope these available tools can act as launching pad and reference point against which future models can be developed that continue to advance the field and improve ALS clinical symptom assessment.

We are forever grateful to the committed heroes with ALS who contributed their time and effort to this research program. We know that completing these exercises and voice recording protocols is a burden – especially as symptoms worsen. We cannot thank you enough.

Beyond Daily Step Count: Evaluation of an Individuals Physical Health Status From a Wearable Activity Sensor 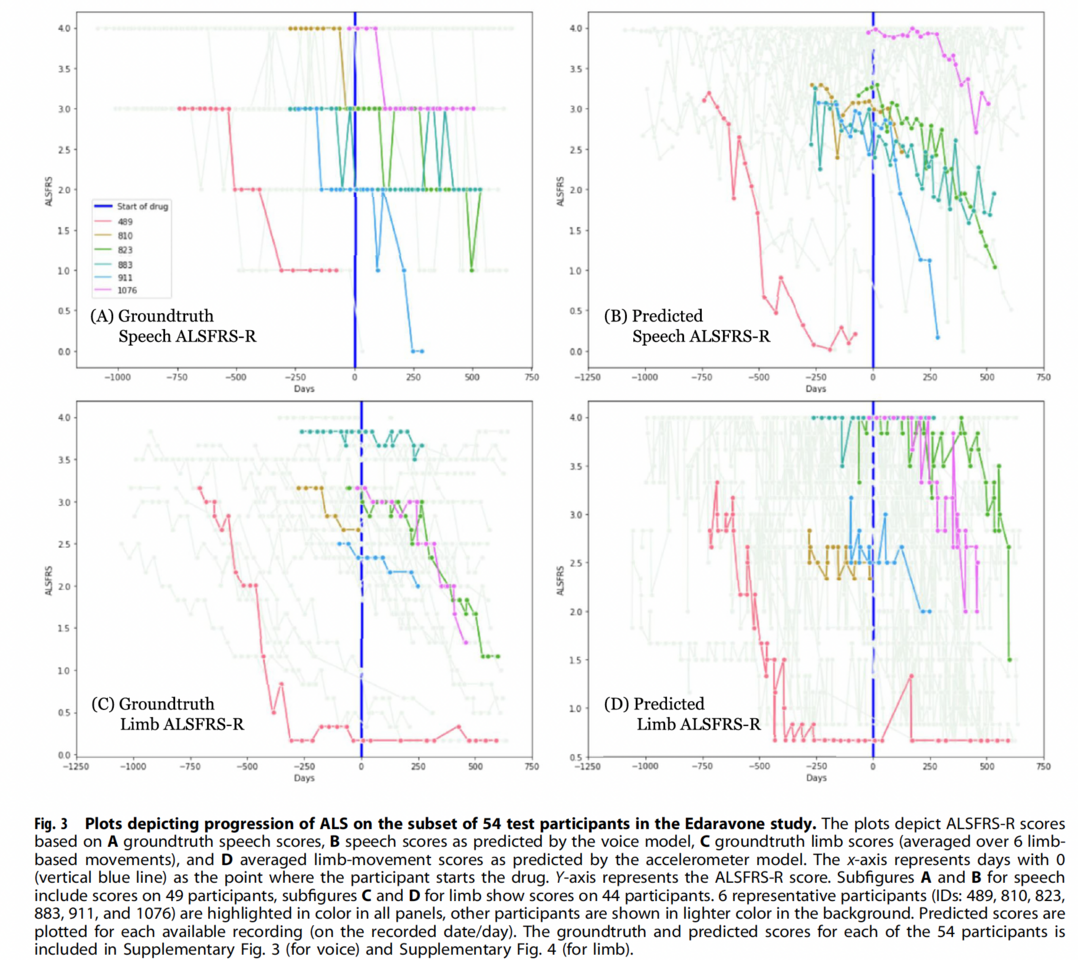 A machine-learning based objective measure for ALS disease severity

Thanks to data contributed by hundreds of people with ALS, ALS TDI and Google Researchers team up to use machine-learning and digital outcomes to measure ALS symptom severity - opening new avenues for clinical treatment efficacy assessment and patient care.