We envision the day that toilets provide feedback on our health in real time.
Ian Miller
Research Data Scientist, University of Wisconsin - Madison
Follow
Like

Imagine having prescription antibiotics delivered to your door before you even get a headache from the sinus infection you didn’t know you had. Or the confidence you’d feel knowing that every day multiple diagnostic markers of leukemia, for which you have a family history of, are being expertly examined.

Though currently beyond the scope of reality, such technology is the promise of personalized medicine. Wearable devices and smartphone applications enable monitoring of an individual’s health and wellness in real time. However, most of these consumer-grade technologies offer a limited amount of information on a user’s wellbeing, such as in heart rate and step count. Yet such data, when available at scale, can be incredibly powerful.

For example, Apple (CA, USA) recently received FDA approval to alert users to cardiac arrhythmias, in large part due to the wearable’s ability to pull continuously and passively collected data from 400,000 volunteers. And while this type of data can lead to transformative technology, it remains fundamentally limited by its inability to measure other important metrics, such as metabolic health. Other clinical-grade tools focused on the biomolecular analysis of blood and saliva have proved effective in this regard, yet remain largely inaccessible due to their cost and disruptive and invasive nature of collecting relevant biological specimens. We envision that a toilet capable of quantifying metabolites in urine could serve to fill the void between clinical and consumer-grade technology for personalized medicine.

Urine is a rich source of thousands of cellular metabolites, whose abundances are associated with a wide array of human conditions, including cancer, inflammation, obesity, and neurological and infectious diseases. Urine metabolite levels can also reflect lifestyle factors such as alcohol and tobacco consumption as well as diet and exercise, which contribute to the chronic diseases that cost the healthcare system $2.79 Trillion (90% of all healthcare expenditures) in the US alone! To garner wide-scale consumer adoption, technology must impose minimal changes to lifestyle, such as with smart watches, which collect previously unavailable data continuously and passively.  Unlike other biological samples such as blood or saliva, urine can be collected continuously and passively without any changes in human behavior.

In our proof of concept pilot study, we collected every single urine sample for 10 days, along with biohealth data (diet, sleep, exercise) from smart phone applications. We quantified urine metabolites using gas chromatography and mass spectrometry, reasoning that this technology would be most amenable to miniaturization and integration within a “smart bathroom.” Although our study was small and our insights preliminary, we propose a simple and integrative framework to correlate metabolite levels detected in urine with any data collected from smartphones. Ultimately, our goal is to collect sufficiently large datasets to predict the onset of diverse disease processes while they can still be prevented and to monitor the efficacy of therapeutic intervention, such as through pharmacometabolomics.

Of course, there are many challenges associated with building a device that is robust enough to withstand repeated analysis of urine from multiple users, sensitive enough to quantify tens, if not thousands of metabolites, and affordable enough to reduce instead of add cost to the already overburdened healthcare system. While technological, economic, regulatory, and ethical hurdles abound, we are confident that the smart toilet will make its way into modern households and provide a technological basis to realize the predictive, preventive, personalized, and participatory power of future medicine. 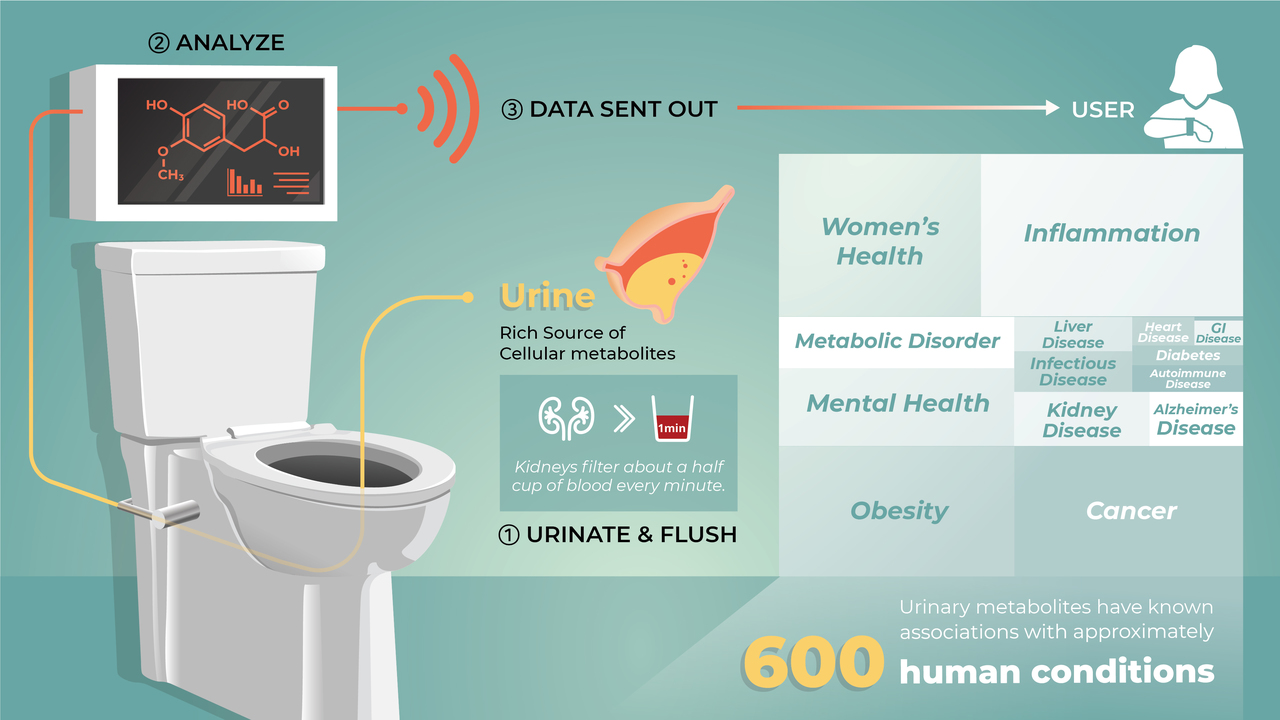 We envision the day that toilets provide feedback on our health in real time.